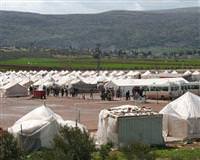 Escaping İdlib, 452 Syrians including women and children crossed into Turkey through the Kavalcik village located in Reyhanlı.

According to information obtained from local sources, due to the bombardment on İdlib by Syrian Forces, a significant number of Syrians residing in the city and surrounding regions have headed for the border in order to cross into Turkey for their safety. Arriving in the evening hours, 452 Syrians made their way to the Kavalcık village border and after being registered by security forces, they were placed in the Hac Accommodation Facilities tent city. Including a group of 37 that crossed the border earlier that day, the total number of Syrian's requesting shelter yesterday reached 489, according to sources.

Gaziantep's İslahiye district is also setting up a refugee camp anticipating that with the violence escalating in Syria, there may be more people crossing the border.

Gaziantep Governor Erdal Ata and his accompanying committee met with the İslahiye District Official to be briefed on the camp's progress. The committee later inspected the 280 thousand square meters of unused land belonging to the Tekel Yaprak Tobacco Processing Department. Governor Ata stated that they aim to complete all work on the region's infrastructure, electricity, medical, safety and shelter needs. Ata also stated, "Efforts are still ongoing to set up the Tekel Facilities as a place to provide shelter, if we see a wave of migration." Ata shared plans to set up approximately 2,000 tents in the camp and noted that the area they are using has been designated safe in the case of an earthquake. Director of Natural Disasters and Emergency Situations Sinan Atakan noted that they have set aside ten million liras in funding for the camps and said that heavy machinery belonging to the Special Provincial Administration and İslahiye Municipality have been working for four days now.

There are some 13,000 registered Syrian refugees now living in tented camps in Hatay with an estimated 2,000 more unregistered people staying with relatives and friends in surrounding villages and towns.

The United Nations said on Tuesday an estimated 30,000 refugees have fled Syria since the start of the conflict a year ago, while hundreds of thousands are thought to be displaced within Syria.

Turkey fears a surge of refugees, similar to the tens of thousands who crossed from Iraq during the 1991 Gulf War. Ankara has signaled a tide of refugees is one of the factors that could trigger efforts to establish a 'safe zone' on the Syrian side of the border.

Having ditched its earlier friendship with Assad because of his refusal to swap repression for reform, Turkey is now at the forefront of efforts to galvanize international action to stop the violence spiraling into civil war.