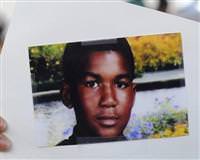 The case of an unarmed black teenager shot dead by a white neighborhood watch captain who police have failed to arrest will go before a grand jury, Florida prosecutors said on Tuesday.

State prosecutor Norm Wolfinger made the announcement as the victim's family lawyer said 17-year-old Trayvon Martin was on his cellphone with a girlfriend, giving her a chilling, minute-by-minute account of what was happening in the moments before he died.

Police in the central Florida town of Sanford where Martin was gunned down have not arrested neighborhood watch volunteer George Zimmerman. They did not return phone calls on Tu esday
seeking comment on the case, which has sparked widespread public outrage since the release of 911 emergency tapes last week.

Family lawyer Ben Crump said the girlfriend's testimony shed new light on the killing and would show that Zimmerman targeted Martin because he was black.

"This confirms that Trayvon Martin was killed only because he was a young black man who was profiled by Zimmerman," Crump told Reuters.

Phone records show the girl, who Crump would not identify because she is a minor, had been talking to Martin off-and-on all day on Feb. 26, and can provide convincing evidence that he was behaving normally, Crump said.

"Her call connects the dots to completely destroy what Zimmerman said (to the police) about 'this kid was up to no good,'" Crump said. "This kid was simply trying to walk home and get out of the rain while he talked to his little friend. And that's all he was doing. He was completely innocent."

Martin was walking home from a convenience store, where he went to buy snacks shortly before the NBA All-Star basketball game, when Zimmerman spotted him. Zimmerman called Sanford Police to report a suspicious person in the neighborhood and then, while armed with a handgun, followed Martin despite the police dispatcher telling him not to.

The Justice Department's Civil Rights Division and the FBI said o n M onday that they had opened an investigation into the shooting.

Police have declined to arrest the 28-year-old Zimmerman and turned the case over to prosecutors, citing Florida's "Stand Your Ground" law, enacted in 2005 and now in effect in about 20 other states. The law provides a shooter with wide latitude to claim a killing was in self-defense.

Crump said Martin got off the phone with the girl for a few minutes because he was running to get out of the rain.

"IN COLD BLOOD"
The two reconnected by cellphone for the last time at 7:12 p.m. for four minutes. Police say they arrived at the scene at 7:17 to find Martin dead from a gunshot, Crump said.

The girl told Crump that Martin told her he was being followed and that she had encouraged him to run.
"She knew details about what went on because he was telling her," Crump said.

He said the girl heard the initial confrontation between Martin and Zimmerman. "Trayvon said, 'Why you following me, man?'" and Zimmerman said, 'What are you doing here?'" Crump said.

He said the girl could tell by Martin's voice that he was then pushed. She thinks Martin's cellphone headset came off and then the call was disconnected, Crump said. He said that when she called back, the girl did not get an answer and knew nothing else until she heard of Martin's killing on the news.
The girl was so traumatized after learning what happened that she was unable to attend Martin's wake and had to be hospitalized, Crump said.

Crump said the investigation of Martin's killing is unfolding in typical fashion for a case involving a black victim in America, with police and prosecutors prolonging an investigation before passing the buck to a grand jury.

He also criticized police for performing a background check on Martin and testing him for drugs and alcohol, procedures that he said had not been applied with Zimmerman.
"It's almost like a playbook," Crump said. Crump said Martin's parents believed nothing would have been done about their son's killing had they not brought in their own lawyer to put the spotlight on the case.

"Arrest George Zimmerman for the killing of Trayvon Martin in cold blood today," Crump said. "It's about equal justice."

Highlighting interest in the case, more than 628,000 people have signed a petition on Change.org, a social action website, calling for Zimmerman's arrest. Wolfinger, the state attorney, called for patience as he announced that a grand jury would be convened on April 10 to investigate the killing.

In what were thought to be her first public comments on the case on Tuesday, state Attorney General Pam Bondi said investigators from the Florida Department of Law Enforcement would help ensure a "complete and thorough review" of all facts surrounding Martin's death. "No stone will be left unturned in this investigation," Bondi said.