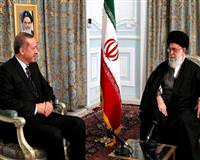 Iran’s spiritual leader Khamenei expressed his discomfort concern with the bloodshed of Muslims in Syria.

Prime Minister Recep Tayyip Erdogan expressed his concerns regarding the developments in Syria. In turn, Khamenei stated that he was in favor of Iran's nuclear negotiations being held in Istanbul.

Khamenei also mentioned his discomfort with the ongoing bloodshed of Muslim's in Syria as well as with external intervention and emphasized that the Syrian public needs to be able to determine their own future through an election.