Sixty-thousand defectors in the Syrian Army 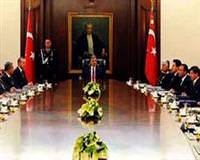 On April 30th, the National Security Council convenes to discuss recent reports on, which contain detailed information on Assad’s troops. According to the report, over 60,000 soldiers have defected from the Syrian military to join the opposition.

At the upcoming National Security Council meeting, the highest echelon of the Turkish government convene to discuss the developments in Syria following the implementation of the Annan Plan. President Abdullah Gül chairs the summit which will be held on April 30th at the Çankaya Palace. The main items on the agenda will include Syria, Iraq, Iran, the EU and Cyprus. Prime Minister Tayyip Erdoğan is expected to offer an assessment of recent trips to China, Iran, Saudi Arabia and Qatar as well as to provide details on his meetings with Massoud Barzani and Iraqi Vice-President Tareq al-Hashemi. The council will also hold a detailed evaluation of both reports on Syria prepared by the Foreign Affairs Ministry, the General Staff and the National Intelligence Organization (MİT) as well as other informative notes provided by a variety of establishments.


According to reports prepared on Syria, one-fifth of Bashar Assad's military has defected. With approximately 300,000 troops in total a majority of which are in the land forces, Syria's Army has lost 60,000 to 65,000 members to the opposition front. The highest number of defections is seen from troops assigned to the Lebanon, Turkish and Iraqi borders. The number of officers which have deserted the Third Army Command in Aleppo alone has reached 300. According to information obtained, the opposition has begun to acquire heavy weaponry and is now supposedly in control of an airbase located near Aleppo, which houses aircraft from the second fleet.

Reports emphasize that the highest number of defections over the past two months have been experienced in the Air Forces. Although the air bases surrounding Damascus remain in full control of the regime, approximately 50 officers, including pilots have defected from air bases located near the Aleppo region.

According to reports, there is a significant transformation occurring in the national demographic layout, coinciding with the developments in Syria. In accordance with Syrian State Leader Assad's orders, the Nusayri population which reside in the north eastern and eastern regions are now moving west in stages. Reports do not list precise numbers, however state that it is visibly evident that the Nusayri population is settling along the Aleppo-Latakia-Damascus line.

The reports also reveal that Assad is attempting to control the PKK by way of Fehman Hüseyin, an influential figure for the terrorist organization. However, due to contention with the organization's leader in Turkey Abdullah Öcalan as well as successive operations staged in the Kandil region, Assad is unable to connect with the administrative cadre. Thus far, the Syrian administration has only been able to make contact with second and third level PKK militants.