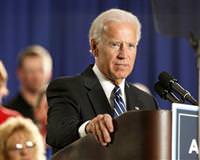 United States Vice President Joe Biden expressed his disappointment that the European Union has kept the door closed to Turkey up until now and underlined that Washington’s close ally Ankara is of ‘unique importance’.

Attending a donation campaign for U.S. President Barack Obama's election campaign, Joe Biden was speaking to members of the Turkish-American community when he stated, "Ankara is one of our most important allies."

Biden called Turkey an entranceway and bridge between the East and the West and stated, "Like the President (Obama), I criticize some of our European allies for not completely accepting Turkey into the economic union and for not considering Turkey as a complete part of Europe."

Expressing that their stance on Syria is identical to that of Prime Minister Recep Tayyip Erdoğan and emphasizing that they hope Turkey will be a leader in the entire region, Biden states, "No one knows if the Arab Spring will or will not turn into a winter in the future. Nobody knows what is going to happen. However we do know that nothing is going to happen on issues that we do not collaborate on our activities on with the Turkish administration."