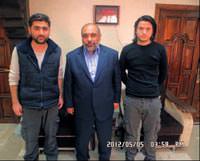 Yesterday, aHaber released the first footage seen of the two Turkish journalists who went missing in Syria two months ago.

No news had been received from journalists Adem Özköse and Hamit Coşkun for two months following their arrival in Syria. That is until Bülent Yıldırım President of the Humanitarian Relief Foundation (İHH) tracked down their whereabouts. It turns out the two journalists were being held in Damascus, and according to Yıldırım they are doing well and will hopefully be returning to Turkey soon.

In an exclusive interview with SABAH, Yıldırım stated, "We had been investigating their whereabouts for a long time now. After making contact with Iranian and Syrian officials, we were finally able to speak with our journalist friends. It was the first time Adem and Hamit had seen each other in 58 days." Yıldırım, who first met with the two journalists in Damascus on May 5th, went on to state, "They were held in separate cells after their arrest; however they were not subjected to poor treatment." Explaining that efforts are ongoing to ensure the two Turkish journalists' safe arrival to Turkey Yıldırım said, "Turkey's Ministry of Foreign Affairs was always by our side and we are very well aware of their intense support."

A Haber was the first Turkish television station to release images of Adem Özköse and Hamit Coşkun. Providing concise commentary, both journalists expressed that they were doing well and wanted to thank all of those who offered their support while they were detained.
Deputy Prime Minister Beşir Atalay has also announced that the Turkish journalists are in good health and that they are doing all they can to bring them back to Turkey.