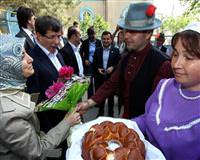 
Davutoğlu and his delegation were greeted by the head of the Gagauzian Autonomous Region Mihail Formuzal as well as other officials upon their arrival to the Gagauzian capital Komrat, with the traditional offering of salt and bread. Davutoğlu first met with Gagauzian Autonomous Region Governor Mihail Formuzal and the Gagauzian Executive Committee as well as members of the Aksakallar Council. Speaking to reporters, Formuzal expressed how pleased he was to see Davutoğlu and that their cultures have lived together for hundreds of years however were later forced to separate and that they feel they are Turks themselves.

Davutoğlu expressed that he felt like he was coming home upon his arrival to Gagauzia and noted that they did not distinguish between Turks and their own citizens. Reminding that he is the first foreign minister to visit Moldova and the Gagauzian Autonomous Region since Moldova gained independence, Davutoğlu delivered the good news that they will soon be lifting mutual visa regulations and will be signing a free trade agreement.

Davutoğlu went on to state that the Gagauzian Autonomous Region has created a bridge of friendship between Moldova and expressed that as Turkey, they will always stand behind the Gagauzian Turks. "We are all the branches of the same tree. We are 75 million plus 200,000," stated Davutoğlu.
Foreign Affairs Minister Davutoğlu later attended a special mass in his honor at the Gagauzian Turks' Ivan Church. Later, Davutoğlu paid a visit to the Atatürk Library where he presented a gift of his signed book Strategic Depth.