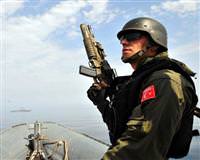 According to an announcement released on the General Staff website, the operation staged by SAT commandos led by Rear Admiral Sinan Azmi Tosun assigned to the TCG Giresun Frigate in connection with NATO, is currently ongoing in the Gulf of Aden and surrounding regions against pirating.

The announcement went on to state that on Friday May 11th, S-70B Sea Hawk helicopter, positioned on the TCG Giresun Frigate, detected a pirate ship located 190 sea miles into the Oman shore which was preparing to stage attacks on commercial ships. According to the announcement, the ship was stopped following warnings and upon orders by the NATO Permanent Sea Task Force Group- 2 commanders staged an operation on the ship holding seven Yemeni ship crew and 14 Somali pirates. During the operation a significant number of weapons and ammunition was confiscated. The announcement went on to state that the TCG Giresun will continue efforts to prevent pirates and to ensure that commercial ships are able to travel safely through the Gulf of Aden and neighboring regions.