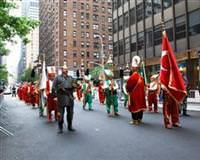 On May 19th, the streets of New York will be strewn in red and white for the Turkish American Association Federation’s 31st Turkish Day March and Festival.

Chairman of the Turkish American Association Foundation (TADF) President Ali Çınar has announced that preparations for the Turkish Day March and Festival are currently ongoing at full speed. The march will be held on May 19th and will begin from the corner of Manhattan's Madison Avenue and 56th Street and will end at the Dag Hammarskjold Park, located next to the Türkevi.

They are currently exerting intense promotional efforts in order to draw interest from Americans for this year's Turkish Day March, explains Çınar, who states that they have already begun placing ads in newspapers such as the New York Times, Daily News, Metro New York and Village Voice as well as have made a number of short presentations on two different American television stations' morning programs. In addition, Çınar explains that they will be distributing brochures detailing the event in Times Square as well as in a number of touristic destinations.

Explaining that the General Staff's Janissary Band will be participating in the march, Çınar states that the Turkish Day March and Festival will be important not only in joining the Turkish community but also in terms of promoting Turkey in the United States.
According to Çınar, Deputy Prime Minister Bekir Bozdağ, Deputy Foreign Affairs Minister Naci Koru as well as a number of Turkish MP's and high-level bureaucrats will be attending the march. Çınar also states that they are expecting Deputy Prime Minister Ali Babacan to also join in the festivities.

Following the march, festivities will be held at Dag Hammarskjold Park and will include performances by Ege, Burak Kut, Demet Sağıroğlu and Eşref İncioğlu. The festival will also showcase performances by the Ankara Municipality's Folk Dances Group and Istanbul University's Conservatory.

May 16th, 2012- A Special Mother's Day Program with Derya Baykal

The Turkish American Women's Union will be celebrating Mother's Day on May 16th at 18:00 at the Türkevi with Derya Baykal, who will be doing her show Bizlerle at the event.

Led by the federation's member union the Turkish American Foundation, on May 17th the Turkish flag will be raised on Wall Street.

The New York Embassy and the Brooklyn Municipality will be jointly holding the Turkish Day Festival in Brooklyn. The festival will include a number of performances including the General Staff Janissary Band, which has been invited by the Turkish American Association Federation and the Folklore Group which will be taking the stage.

A ceremony will be held for remembrance of the genocide staged against Crimean Turks.

The 31st Turkish Day Ball will be held at the Mariot Marquis Hotel where performances will be staged by Ege, Demet Sağıroğlu, Burak Kut and Eşref Inceoğlu as well as a number of surprise guests. Ticket sales are still ongoing for the event.

On May 19th, which is also Atatürk's Remembrance and Youth and Sports Holidat, the New York Turkish Day March and Festival will include performances by the General Staff's Janissary Band, the Ankara Municipality's Folklore Group, the Istanbul University Classic Music Group, the Native Americans Red Hawks Group and Somali American Groups as well as by famous performers Ege, Demet Sağıroğlu, Burak Kut and Eşref İnceoglu.