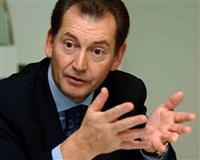 Leader of Europe’s Liberals and European Parliament member Sir Graham Watson issued a series of harsh criticism against the Greek Cypriots, which have recently taken on the EU term presidency.

Speaking at a European Parliament meeting in Strasbourg debating the Greek Cypriots taking over of the EU Term Presidency, British MP Watson stated that the Greek Cypriots, whom have made themselves hostages to Moscow, would be unable to lead the EU.

Referring to Christofias as Europe's 'sole communist president', Watson went on to emphasize his discomfort with the close relations harbored between the Greek Cypriots and Russia.

Stating that by avoiding negotiations with Ankara and overlooking problems of those citizens stuck behind wire fences, Greek Cyprus would not be able to lead the EU. Watson's harshest words were directed towards those Greek Cypriots attorneys and contractors who victimize British nationals who purchase real estate from Greek Cyprus. Stating that if the Greek Cypriots continue to ignore the wheeling and dealings of the Greek Cypriot attorneys and contractors, Watson asked how they could serve as president of the EU. Watson also referred to the Cypriot Turks as the EU's forgotten citizens.

Watson, who is also a European Parliament representative of the Gibraltar region states that both Gibraltarians and Turkish Cypriots are not protected by the EU institution.