Once again, Assad is biding time 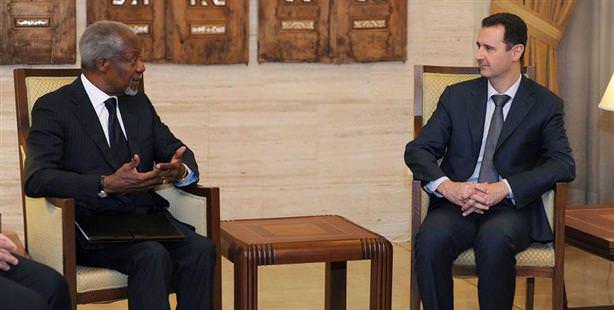 After meeting with Syrian State Leader Assad, U.N. Special Representative Annan announced that they would be conforming to the new approach. Meanwhile, as Assad’s efforts to bide time continue, yesterday 29 people were killed in Syria.

While Syria continued to stage military drills using real weapons, efforts to put a halt to the violence in the country continued. Arriving to Syria the day before yesterday, United Nations and Arab League Special Envoy Kofi Annan met with Syria President Bashar al-Assad. Joining the meeting was Syria Foreign Affairs Minister Velid Muallim, Deputy Foreign Affairs Minister Faysal Mikdat and Annan's spokesman Ahmed Fevzi and UN monitoring committee Chairman Norwegian Full General Robert Mood. After the two-hour meeting with Assad in Damascus, Annan stated that they had reached a consensus on an approach to put a halt to the violence; however the U.N. convoy refrained from delving deeper.

NO MORE WEAPONS FROM RUSSIA

Although Annan refrained from revealing clear details on the new approach, he did note that it would involve the opposition. Annan later moved on to Iran from Syria. Meanwhile, Russia, which recently met with the Syrian opposition, has announced they will be shelving all weapons exports to Syria.
Military and Technical Collaboration Department Vice Chair Viyaçeslav Zirkaln has already announced that Russia has halted the delivery of all weapons and will no longer be signing on to a new weapons agreement. , Zirkaln also explained that up until now they have solely provided repair and maintenance support for weapons previously supplied by Russia.

Russia's Foreign Affairs Minister Sergey Lavrov recently met with the Syrian opposition's human rights defender Michel Kilo. Lavrov stated that the increasing violence in the nation has resulted in obstructing dialogue between the administration and the opposition.

Calling for the agreement reached in Geneva to be implemented, Lavrov told Kilo that they considered him to be a patriot and emphasized that therefore they hope he will contribute to the process. Kilo responded by stating, "Russia is Syria's strategic partner. Normalization of the situation would be to both the opposition and Russia's benefit."