'The photograph depicts their close relationship' 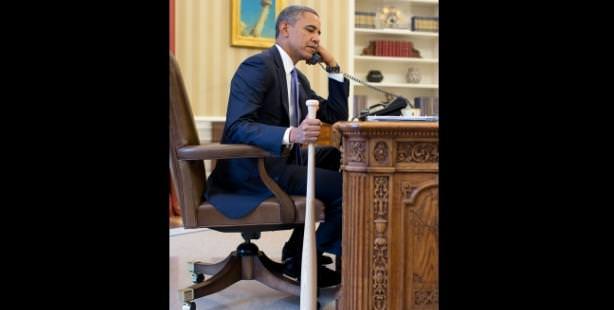 The White House has issued a statement to explain their release of a photograph of U.S. President Barack Obama holding a baseball bat as he discusses the situation in Syria over the phone with Prime Minister Recep Tayyip Erdoğan.

White House National Security Council Spokeswoman Caitlin Hayden said the photo was taken and released in order to depict the close relationship between U.S. President Obama and Prime Minister Recep Tayyip Erdoğan. Hayden said her department had released the statement after seeing the commentary and speculation that surfaced in the Turkish media regarding Obama's handling of a baseball bat which was a gift to the president by American athlete Hank Aaron.

The statement released by the White House read, "We posted this photo with only one goal, and that is to highlight the close relationship of President Obama with Prime Minister Erdoğan, and to draw attention to their meetings on the Syrian crisis. The president cares highly about the partnership and friendship he has with Prime Minister Erdoğan on a series of important issues the U.S. works on with Turkey."