In Turkey, the Orthodox practice freely while in Athens, Mosques aren’t allowed 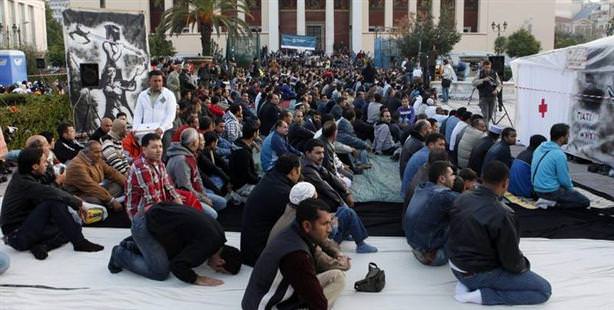 Greek officials are using the economic crisis as an excuse to put the mosque project in Athens on hold. While yesterday in Turkey, the Greek Orthodox were able to hold a mass at the historical Sümela Monastery in Trabzon, in the Greek capital, Muslims unfortunately are not as lucky. This year in Athens, Muslims will be forced to conduct their Ramadan prayer ceremony out in the street.

With the efforts to build a mosque in Athens thwarted for yet another year, over 500,000 Muslims will have to perform their prayer ceremonies for the holy month of Ramadan in the outdoors. The sole European capital to not have a mosque, last year the Athens parliament approved all necessary procedures for the building of a mosque, however now it appears the actual realization of the plans have been hung up due to the economic crisis. The Greek government acknowledges the difficulties suffered by the Muslim community due to their lack of a location to practice their prayer rituals, however cites public austerity as the reason behind shelving the mosque project in Athens "for the moment".

Muslim associations in Athens perceive the economic reasons being purported to delay the project as simply being excuses. Performing the ritual prayer in the open-air leaves people vulnerable to racial attacks. In the past, when Muslims have been forced to perform their ritual prayer ceremony outside, they have been subjected to abuse and provocation including hurling eggs, turning up radios and heckling from people gathering on balconies overseeing the park where people were praying.

While the issue of illegal immigrants, which tend to consist of the majority of Muslims in Greece, is becoming increasingly, this situation not only allows for fanatics to harbor anti-Islamic sentiments, but it is also now evoking such feelings amongst Athens residents in general. These developments present a strong ground for the anti-immigrant politics of the Hrysi Avgi. The European Union is requesting the inspection of whether the actions of this party, in which security forces have been unable to contain attacks, are in accordance to the Greek constitution.