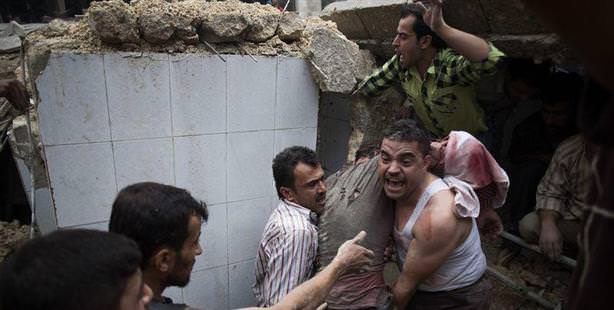 The potential of a cease-fire in Syria during the upcoming Eid al-Adha has been agreed to in principle by the Assad administration; however the regime continues its bombardments of Idlib and Aleppo.

CEASEFIRE ON THE TABLE

The U.N.-Arab League mediator in the Syria conflict, Lakhdar Brahimi has brought the issue of a ceasefire plan for Syria to the table during trips to Iraq, Iran and Lebanon. Brahimi most recently appealed to Lebanese President Michel Suleiman to help arrange a ceasefire during the Islamic holiday of Eid al-Adha also known as the Feast of Sacrifice. The ceasefire plan, which Prime Minister Erdoğan and Iranian leader Ahmadinejad discussed and agreed to during a meeting in Baku has now begun to gain shape following Brahimi's visit to Lebanon.

ALL SIDES IN PRINCIPLE SAY "YES"

Syrian Government Foreign Affairs Spokesman Jihad Maqdisi has announced the state is willing to discuss a ceasefire and said Damascus hoped Brahimi's talks in the region could herald "something which leads to the success of a constructive initiative". Syrian National Council President Abdülbasit Seyda's response was also affirming, stating "if the regime adheres to a ceasefire, so will we." However, the opposition is also raising their concerns regarding a potential ceasefire, with some members stating, "The regime continues its heavy bombardment and continue to stage attacks from warplanes. We do not have heavy weapons or fighter planes; therefore the regime's offensive would have to be halted first."

Davutoğlu: We want the bloodshed to stop

Foreign Affairs Minister Ahmet Davutoğlu states Turkey hopes to see an end to all the bloodshed in Syria, adding that even though conditions were not conducive at the moment, they were making efforts to facilitate a cease-fire in Syria during the upcoming Eid al-Adha.

Speaking to reporters, Foreign Affairs Minister Davutoğlu explained that he discussed the issue of a ceasefire with Brahimi during their meeting last Saturday. "This issue was also discussed between our prime minister and the Iranian president. Both leaders supported this proposal. We are currently discussing the possibility with other neighboring countries. We hope that at least during the Eid al-Adha, we will have managed to secure a cease-fire in Syria," said Davutoğlu.

Lakhdar Brahimi, the international mediator on Syria, has proposed that both Syrian President Bashar al-Assad's forces and rebel fighters seeking his overthrow stop fighting during the Eid al Adha festival, which starts next week. However, there remain to be a number of uncertainties. It is yet unclear whether the ceasefire will be limited to the dates surrounding the Islamic holiday or whether it is possible to establish a permanent ceasefire at present. Even if a ceasefire was solely secured for the Eid al-Adha, the overall consensus is it would be a very significant improvement towards establishing a permanent agreement to ending the violence.

A CEASEFIRE MEETING IN SYRIA

High-level state officials convened over a dinner held in Damascus to discuss the ceasefire. The meeting, hosted by the Syrian Foreign Ministry was also attended by Iranian delegates. During the meeting Syria's Deputy Foreign Affairs Minister Faisal Mikdad called on the opposition for national unity, stating, "The victory will be ours". Mikdad went on to state, "let us convene under the roof of national dialogue and let's build Syria's future together." Addressing the opposition, Mikdad went on to state, "This won't happen with weapons. A victory cannot be won through more bloodshed and the killing of innocent people."

The lobbies may be discussing a ceasefire in Syria; however the regime continues to increase air attacks. Both Idlib and Aleppo which are currently in the opposition's control after weeks of violent conflict spent yesterday under heavy bombardment. Activists told Al Jazeera that Idlib has seen the highest number of air attacks over the past few days and stated that at least 70 people, including children, were killed in recent attacks in Idlib and Aleppo.