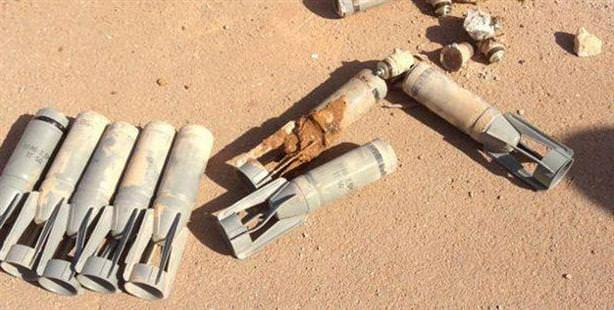 Photographs confirm allegations the Assad regime is using Russian-made cluster bombs to combat the opposition in Syria, a claim the Damascus administration refutes.

As the violence intensifies in Syria, charges leveled by Human Rights Watch that Assad's forces are using cluster bombs, have been confirmed through photographs captured by French news agency AFP. Remnants of the cluster munitions were visible where air strikes intensified in Idlib and Maaret Al Numan leaving rubble in their wake. Rebels claim the bombs are Russian-made. Doctors say that the bodies of the victims in areas of intensified bombing have been torn apart to the point of being unidentifiable.
Cluster bombs explode in the air, scattering dozens of smaller bomblets over an area the size of a sports field. Most nations have banned their use under a convention that became international law in 2010, but which Syria has not signed.

Syria has denied that it uses cluster bombs in its battle with rebels trying to overthrow President Bashar al-Assad, saying it did not possess such weapons. A brief military statement carried by state television came in response to a report by Human Rights Watch claiming otherwise. "The Syrian Arab Army does not possess these kinds of weapons and affirms that these reports (of their use) are completely untrue," the army statement said.

The claims that cluster bombs are being used by Assad's forces was also reiterated by French Foreign Affairs Minister Laurent Fabius the day prior, when he stated that Syrian government forces have added cluster bombs in addition to TNT bombs in their staged air attacks.

Ankara has also responded to the alleged use of cluster bombs in Syria. Foreign Affairs Ministry Spokesman Selçuk Ünal states, "There are reports from Human Rights Watch stating that the Syrian administration is using cluster bombs. We are tracking these reports. I cannot confirm the allegations personally. However, the fact that this type of news is even surfacing is evident of just how ruthless the regime can act against the Syrian public."

Egyptian President Mohamed Morsi has also announced that Egypt supports the calls for a cease-fire during the Eid al-Adha.

Meanwhile, the conflict between the opposition and regime-supporters has now taken on a sectarian aspect. Assad-opposing Sunni militants have besieged the regime-supporting Shiite villages of Nubl and Zehra where 35,000 people live. No one is allowed to leave the villages and armed Sunni militants have closed off the roads. Over the past two days of attacks throughout the country, 315 people have been killed, 23 of which were children.

ANNAN: IRAN IS NOT AGAINST ASSAD LEAVING

Speaking in Washington at the Brookings Institute, Former United Nations Secretary General and Syria Special Envoy Kofi Annan expressed that the Tehran administration is not against Assad's downfall to reaching a democratic solution in Syria.Recalling a visit he paid to Tehran in July where he spoke with government officials, Annan explained that at the time they said, "We will accept that Assad may have to go so long as the Syrian people are given the right to hold a democratic election."