U.N. issues Israel yet another warning 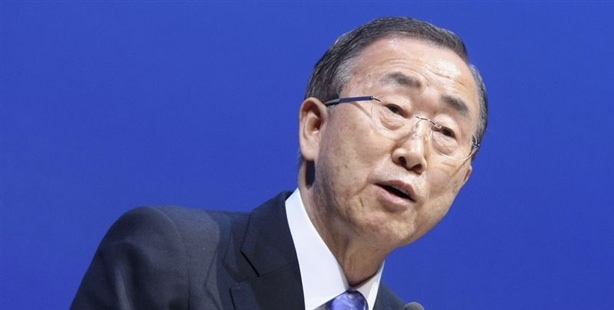 U.N. Secretary General Ban Ki-moon discussed the situation in the Middle East during his annual end-of year news conference. Expressing his concern regarding, "the heightened settlement activity in the West Bank, in particular around Jerusalem," Ban stated that Israel's actions are endangering the possibility of a "viable Palestinian state."

Expressing the great efforts made this year to establish a ceasefire between Israel and Palestine, Ki-moon stated, "The Middle East peace process is in a deep freeze with the two sides more polarized than ever, and a two-State solution farther away than ever before since the Oslo process began in 1993."
The U.N. Secretary General expressed concern that Israel's heightened settlement activity puts the ceasefire at risk and stated, "This decision gravely threatens efforts to establish a viable Palestinian state. I call on Israel to refrain from continuing on this dangerous path, which will undermine the prospects of a resumption of dialogue and a peaceful future for Palestinians and Israelis alike – let us get the peace process back on track before it is too late," stated Ban Ki-moon.

Mentioning that they have condemned the building of these illegal settlements time and time again, Ban stated, "This is clearly a violation of international law and an obstruction of the Middle East peace process. The ceasefire is a sensitive process and during this time any provocative steps should be avoided. The Middle East peace process needs to get back on track as soon as possible. I am urging the Israeli government to refrain from taking any measures of establishing new settlements."

The Situation in Syria

Ban Ki-moon also touched upon the situation in Syria in his press conference to evaluate developments in 2012. "I don't see any sign of the vicious cycle of violence coming to an end and political dialogue beginning. I hope the global community can come together as a single body in order to put a halt to the ongoing violence in Syria. The only hope in solving this crisis is for the U.N. Security council and the international community to approach the issue in a unified manner," stated Ban.

"There are over half a million Syrian refugees which are being sheltered in Syria's four neighboring countries. We are expecting this figure to surpass 700,000 by the end of January. At present, four million people have been affected by the crisis in Syria. At least two million people in Syria have been displaced. I want to thank the nations which opened their doors to Syrian refugees. These nations are attempting to support Syrians however they face a huge financial burden in sheltering and caring for them… I call on the international community to respond generously and urgently to the humanitarian appeal launched today in Geneva," stated Ban.