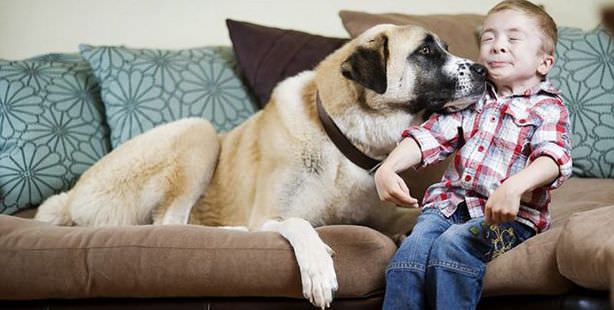 An Anatolian Shepherd Dog or Kangal named Haatchi, who has changed the life of a seven-year-old boy with a rare genetic disorder, has won the “Friends for Life” award at the Crufts annual dog show in England.

Haatchi, a three-legged Anatolian Shepherd Dog also known as Kangal, who was the victim of torture by a previous owner, has won the "Friends for Life" award for his remarkable relationship with his new owner, a seven-year-old boy with a rare genetic disorder at the Crufts Dog Show, held in Birmingham, England.

Haatchi lost his leg and tail when he was run over by a train because his former owner had tied him to the tracks. Reading about Haatchi's story on Facebook, Owen Howkins' father decided to adopt the dog for his son, who suffers from the rare genetic disease 'Schwartz Jampel' and was having difficulties being in open spaces. Haatchi the Kangal changed all of that for Howkins' by giving him a whole new lease on life. The young boy says that seeing how strong Haatchi was with just three legs has made him become stronger.

This year, Crufts, one of the world's biggest dog shows in the world held in Birmingham, England annually, decided to grant Haatchi the "Friends for Life" award for this very special relationship he shares with his owner.