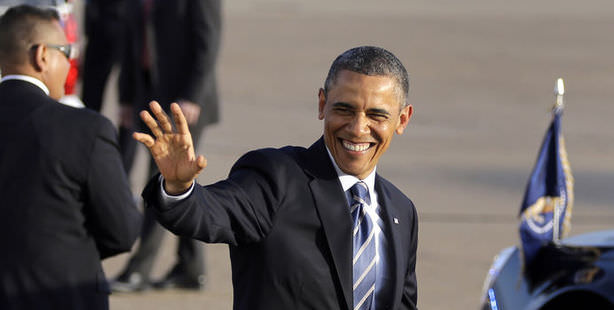 Obama continued the tradition he started last year of referring to the incidents which transpired in 1915 as ‘Meds Yeghern,’ a term which in Armenian means a ‘great calamity’.

In a written statement released to commemorate the April 24th date considered to be the anniversary of the mass killings that transpired in 1915, U.S. President Barack Obama once again refrained from using the term 'genocide' and instead referred to the incident as Meds Yeghern, which means 'a great calamity' in Armenian.

"Today we commemorate the Meds Yeghern and honor those who perished in one of the worst atrocities of the 20th century," said Obama in a written statement released by the U.S. President. "Ninety-eight years ago, 1.5 million Armenians were massacred or marched to their deaths in the final days of the Ottoman Empire," stated Obama.

"A full, frank, and just acknowledgement of the facts is in all of our interests. Nations grow stronger by acknowledging and reckoning with painful elements of the past, thereby building a foundation for a more just and tolerant future. We appreciate this lesson in the United States, as we strive to reconcile some of the darkest moments in our own history. We recognize those courageous Armenians and Turks who have already taken this path, and encourage more to do so, with the backing of their governments, and mine.

The Turkish Foreign Ministry also released a statement in response to Obama's remarks, stating, "In his statement issued on April 24, 2013, US President Obama unfortunately demonstrated once again this year a one-sided approach which reflects the Armenian views regarding the dispute between the Turks and Armenians on the painful part of their common history," a statement from the Turkish Foreign Ministry said.

"We regard this statement, which distorts historical facts, as problematic in every aspect and deeply regret it," read the statement.

"IT IS TOO SOON FOR COURT"

Armenian President Serzh Sargsyan also released a message in commemoration of the date which stated, "Our duty is to realize and also to draw the attention of the international community to the fact that the denial of the genocide is a direct continuation of the same crime."

Armenian Foreign Minister Shavarsh Kocharyan stated that there have been positive developments regarding the recognition of the so-called 'Armenian genocide', however, he stated, "It is too soon to apply to the International Court. It is not the time yet, as there are still stages to pass."