“Either supply us with weapons or prevent the jets from flying” 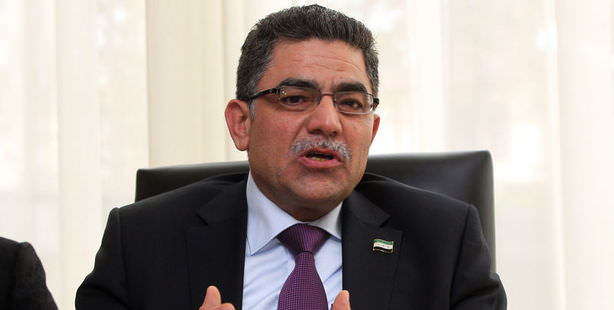 The Syria opposition’s interim Prime Minister Hassan Hitto: “In addition to those from Iran there are also Russian soldiers in the field. We set Turkey’s democracy as an example. We will wage our own war; we just need the groundwork to be established.”

Syrian opposition interim Prime Minister Hassan Hitto, appointed as part of the ongoing efforts to overthrow the Assad regime despite Turkey's admonition that it is too early to announce a new government, granted an exclusive interview to SABAH. Alleged to be a Muslim Brotherhood member and considered to be someone both the U.S. and Saudi Arabia have kept distance from, Hitto says, "We only have 10,000 bullets left. We are not asking you to fight for us however either declare a no-fly zone or supply us with weapons. We are not saying put on your boots and fight for us."

Do you think forming a government, though even Turkey opposes, is the right step?

"Turkey is one of our greatest supporters. We have witnessed in admiration the developments that have transpired in Turkey over the past ten years. We set Turkey's democracy as an example. Yes, Turkey has advised for us to do this later. What we say is that the situation is getting worse in Syria daily. If we do not create an alternative then the situation is just going to get worse. That alternative is a transitional government…"

"I think morale is on the rise amongst the soldiers and the public. The Syrian public is hopeful and determined to continue because they are committed to this revolution. We are going through a difficult time. Today, Iran's presence in Syria is significantly increased; there are more Hezbollah soldiers and Iranian soldiers. There are also allegations that there are Russian soldiers and specialists. Every week weapons are brought in from Russia by ship. Sometimes the international community can be slower to act than the revolution itself."

How much of Syria is in your control?

What are the numbers of your soldiers and weapons?

According to the Supreme Military Council, there are 150,000 soldiers fighting for the revolution. I am not sure of the numbers, however they have light weapons. They are aiming at planes with semi-automatic weapons and dochka anti-aircraft guns. Commander Selim Idris doesn't have enough ammunition to provide for his soldiers on five fronts. Idris' soldiers haven't received a salary for months now. They need to get paid in order to be able to eat. Yes, this is a cost that Syrians have said they would pay. There are a lot of things we could be doing if these jets weren't flying over us. We will wage our own war; we just want you to establish the groundwork in order to be able to do so."

"Just because I am a U.S. citizen doesn't mean I am any less Syrian"

"I am Syrian, but I have also accepted U.S. citizenship. I lived in the United States for 30 years. I went there to study and I worked. I gained a lot of experience. However, just because I am a U.S. citizen does not mean I am any less Syrian."

Is the Al Nusra made up of Syrians, or are they fighters that came from abroad?

"Groups that are fighting to bring down the regime are all a part of the revolution. Al Nusra has announced that they are tied to Al Qaeda. This is foreign to the Syrian public. A group that belongs to a foreign ideology is not a part, nor can it be a part of Syria."

Is the resolution process in Turkey being reflected at all on the field?

"Turkey's stability will benefit the Syrian public. In my opinion, the Turkish government's strategy is very smart."