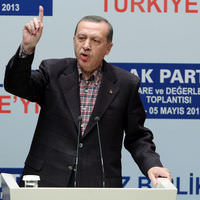 “The number of those who lost their lives in Syria is approaching one hundred thousand. Oh Bashar Assad, by god you will account for this” said Prime Minister Erdoğan.

Chairman of the AK Party and Prime Minister Recep Tayyip Erdoğan said, "While children are woeful and crying, we will not be among the silent tongueless devils. Oh Bashar Assad, by god you will account for this. You will atone for the courage that you didn't show to others, for the baby lying in its crib with a pacifier in its mouth; you will pay very heavily."

"If God gives permission then this person, this murderer will see his punishment here on this earth, and for this god shall be praised. These events have come to push the limits of what is bearable. The international community has still not been able to take the steps necessary on the Syrian issue. The number of those who lost their lives in Syria is approaching one hundred thousand" spoke Erdoğan.

"The CHP, which had its photograph taken with this murderer, this killer in Damascus, Syria should come forth and explain this massacre in Baniyas. Oh CHP, alas this is what you are" said Erdoğan.

"You do not only carry the rights and responsibilities of Edirne, Iğdır, and Van, you also bear the responsibilities of Baku, Nicosia, Kabul and Sarajevo. We are also responsible for Baghdad, Erbil, Gaza, Jerusalem, Hama and Homs," said Erdoğan addressing the AK Party parliamentary body.


Translated from an article in Bugün