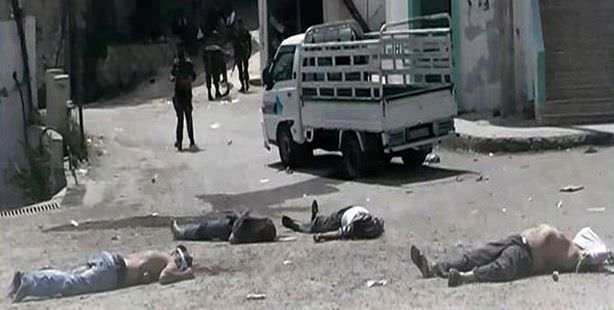 Turkey’s foreign Ministry has released a statement strongly condemning attacks on civilians in the coastal town of Baniyas and the village of al-Bayda calling the killings a crime against humanity and a campaign of ethnic cleansing by Assad’s forces.

Turkey's Foreign Ministry has released a statement strongly condemning the most recent slew of attacks by pro-regime forces and militia against civilians in the coastal town of Baniyas and in the village of al-Bayda located in Tartus and called on the international community to put an end to the regime's inhumane attacks which it stated disregards universal principles and violates international law.

Emphasizing that the Syrian regime stages new attacks and massacres daily on civilians, the announcement released by the Turkish Foreign Ministry stated, "After staging massacres and killings in the vicinity of Damascus, pro-regime forces and militia have now killed hundreds of civilians, a majority of which were women and children, in the center of Baniyas as well as the village of al-Bayda which are located in Tartus. Furthermore most of the victims had their throats slit and a number of their remains had been set on fire," the Foreign Ministry announcement stated.

"We strongly condemn this violence. This development, which is a crime against humanity, also shows that the Syrian regime has now begun a campaign of ethnic cleansing. There have been increasingly strengthening indications that the regime, which has attacked its own public indiscriminately with ballistic missiles and heavy weaponry from the ground, air and the sea, has most recently begun to use chemical weapons." The announcement went on to remind that the regime has yet to permit the UN inspection mission which was established in order to research allegations of chemical weapons use.

The Foreign Ministry also stated: "The Syrian regime and its policies pose a serious threat to regional stability and security. We are extremely sorrowful due to certain sides outside of Syria being complicit in the crimes committed by the regime by continuing to extend all forms of support. We are calling on these sides to abandon their stance and to take on an open and clear position against the crimes of humanity that are being staged in front of our very eyes.

It is now time for the international community to say stop to the Syrian regime's inhumane attacks which disregard universal principles and violate international law. We therefore call on the UN Security Council and all related institutions and organizations to swiftly and determinedly establish the necessary measures in order to ensure the crimes committed by the regime in Syria come to an end."