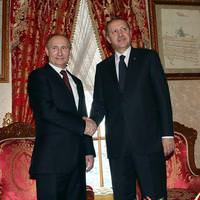 I had hoped, that the Erdoğan-Obama meetings would handle more economic topics and that despite the close relations that have continued for the past 60 years, though at times being problematic, the topic of the somehow non-increasing trade volume would be discussed.

In-fact how the boundaries of the educational agreement between the two countries could be expanded should have also been brought up. Today, we do not have a grasp on the exact number of students enrolled in higher education. However, our largest exports to that country are masters and doctoral students. Let's just stop and think about how many million dollars annually we deposit in that country for educational purposes. I wonder if new steps could have been taken, couldn't some new projects be developed? But the Syrian question became the focal point of the talks, and most importantly the door was cracked open for new developments. The front runner of these being Geneva II.

As a determinant of what is to come, the 'Geneva Diplomacy' is a very important development.

1. Thus Turkey's vital social imperative approach of emergency action has almost completely been done away with. There will be no direct intervention from the United States or Europe to the continuing Bashar Assad regime in Syria. The creation of a no fly zone has been completely left up to the UN. Due to this the Syria Question is now not one of war and intervention but stands in front of us as a question of diplomacy. This is a difficult scenario. The reason is obvious: Turkey is a country that is directly in contact (in every which way) with Syria. We have a thousand odd miles of borders. We host an unfathomable sum of nearly 450 thousand refugees. This is the unofficial figure. Think of all else that is left. The Assad regime is in the position of implicitly declaring war on Turkey. Turkey with its opposition army in the context of relations is continuing this war with Syria. Under these circumstances intervention, in other words delaying the removal of Assad from office, at a time already dealing with delays, the question of how Turkey will continue these relations is uncertain and will be determined by what is to come. But it is undoubted that Turkey will be frustrated by this issue.

2. Russia will continue to play a side role a part in this issue one way or the other. When Putin came to Turkey, it seemed as if they were able to pull him to their side, but shortly after was discouraged and once again returned to its initial position. Putin aims to make Russia a shot caller, in an issue like this and in world politics. Everybody knows that the weapons in the hands of the Syrian Army originate from this country but they do nothing about it. From this aspect it is a proper and correct decision that Russia be involved in the solution, that it be held in the resolution process. Geneva II will ensure this. It is also important from this aspect.

3. For me this is the most interesting part: The United States, openly, considers Turkey and Israel as allied to itself and does its lack of intervention in Syria stem from bad memories in Iraq and Afghanistan, or from its indecision of which of these two countries will first play a role and come into the spotlight in Syria, in the new Middle East?

Translated from an article by Hasan Bülent Kahraman in Sabah.