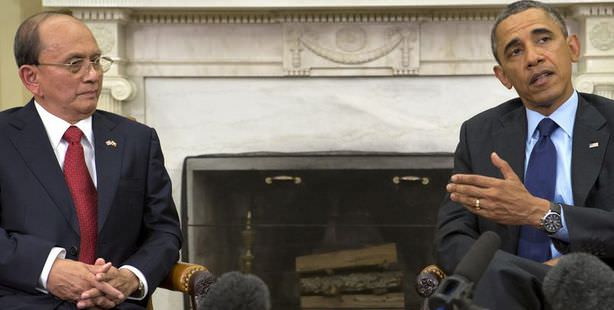 Days after Prime Minister Erdoğan called on U.S. President Obama to take action against the ongoing massacres suffered by Muslims in Myanmar, during a meeting held in the Oval Office of the White House, the U.S. leader hosted Myanmar President Thein Sein for a meeting in the very same location.

President Barack Obama urged the Myanmar President Thein Sein on Monday to halt the killings of Rohingya Muslims in western Myanmar's Rakhine state, during the first visit to the White House in 47 years by a leader of the Southeast Asian nation previously referred to as Burma.

Reformist Myanmar President Thein Sein vowed to resolve ethnic conflicts and bring perpetrators to justice.
"I also shared with President Sein our deep concern about communal violence that has been directed at Muslim communities inside Myanmar. The displacement of people, the violence directed towards them needs to stop," Obama said.

At least 192 people died last year in violence between Buddhists in Rakhine and Rohingya Muslims, who are denied citizenship by Myanmar. Most of the victims, and the 140,000 people made homeless in the attacks, were Muslims.