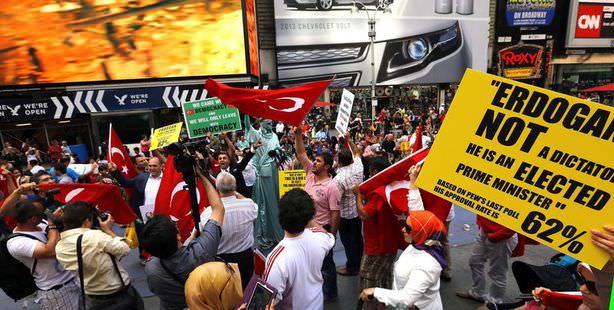 The Turkish-American ‘Everything for Turkey Platform’, left a black wreath which read "The Turkish public will never forget CNN’s manipulations” in front of the CNN building in New York on Saturday.

On Saturday, the "Everything for Turkey Platform," formed in conjunction with member associations of the New York based Federation of Turkish American Associations as well as a number of trade organizations and civil activists held a rally which began in Manhattan's Foley Park. The group of Turkish Americans protesting the escalation and provocation of the Gezi Park protests later moved on to the entrance of Central Park. From there, the crowd marched to the New York CNN headquarters holding up signs in support of Prime Minister Erdoğan and condemning CNN's method of covering the protests in Turkey and proceeded to lay a black wreath at the building's entrance which read, "The Turkish public will never forget CNN's manipulations."

Speaking on behalf of the group, Emine Yılmaz touched upon the media's role in the protests sparked by Gezi Park and stated that CNN's coverage of the developments not only failed to present the protests accurately but also encouraged the escalation of demonstrations through provocation. "We reject and condemn this provocation and distortion of events," stated Yılmaz. One sign stood out that read, "CNN show is over" as the group proceeded to march to Times Square while chanting "Liar CNN."

Another group came out requesting CNN continue its coverage

Meanwhile, another group of Turks also gathered in front of the CNN building to demand CNN continue its broadcasting from Taksim Square. Immediately after the Everything for Turkey Platform laid the black wreath in front of the CNN building, the second group held up a sign reading, "Thanks CNN, however we need more," and sang songs and chanted slogans for awhile in support of CNN's coverage of the protests in Taksim and demanding they continue.