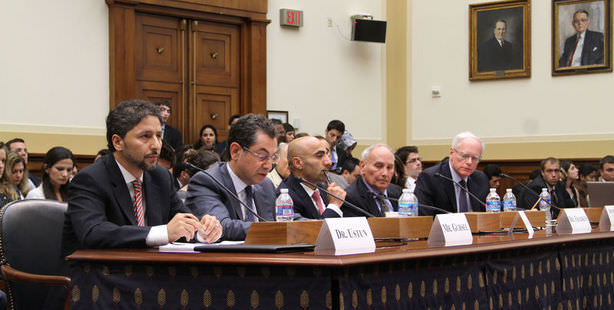 Five Congressmen from the U.S. House Committee on Foreign Affairs listened to five U.S. and Turkish experts share their views on the Gezi Park protests in a special hearing held on Wednesday.

The U.S. Congress held a special congressional hearing on Wednesday to discuss the Gezi Park protests which have persisted throughout Turkey for nearly three weeks now. During the session, held by the U.S. House Committee on Foreign Affairs, five congressmen listened to talks by five Turkey experts on the Gezi Park protests. Entitled "Turkey at a Crossroads: What do the Gezi Park Protests Mean for Democracy in the Region?" the session was organized and chaired by Republican Representative Dana Rochrbacher, Chairman of the Europe, Eurasia, and Emerging Threats Subcommittee. Rochrbacher said the hearing aimed to discuss the challenges Turkey faces both at home and abroad and to assess its potential impact on U.S. interests, adding "This hearing is not intended to be a beat-up hearing on Turkey."

Joining the session were five Turkey specialists; Soner Çağaptay, the Director of the Turkish Research Program at the Washington Institute for Near East Policy, former ambassador to Turkey James Jeffrey, journalist Kadri Gürsel, Kadir Üstün, Research Director of the Foundation for Political, Economic and Social Research Center (SETA) in Washington D.C. and Hillel Fradkin, the director of the Center on Islam, Democracy and the Future of the Muslim World at the Hudson Institute, who shared their views on the impact of the Gezi Park protests.

"IF DEMANDS ARE MET DEMOCRACY WILL GAIN STRENGTH"

SETA Washington Research Director Kadir Üstün stated that the Gezi Park protests were much more comparable to the Occupy Wall Street demonstrations in New York than the Arab Spring. "The basic dynamics of the protests are fundamentally different from the Arab revolutions where there was no meaningful representation of the popular will," said Üstün who also emphasized that if the youth's legitimate demands are heeded, Turkey's democracy will further strengthen. Director of the Turkish Research Program at the Washington Institute Soner Çağaptay concurred that he also did not agree in the comparison with Arab Spring and said that the Taksim protests are actually indicative of Turkey's progress.