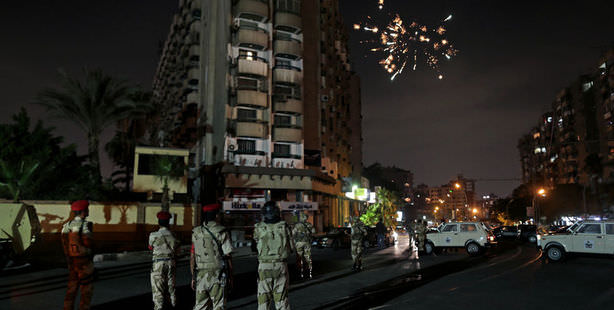 Egyptian Defense Minister Sisi has announced the head of the constitutional court as the new interim president of Egypt until presidential elections are held.

Chairman of the Supreme Council of the Armed Forces of Egypt Abdul Fatah Al Sisi announced a military coup in the country on July 3. Speaking on live broadcast, Sisi said the army tried hard to achieve a national reconciliation; however, the presidency refused and added, "the Army cannot ignore the Egyptian people's demands." Sisi stated, "The roadmap includes suspending the constitution."

Egypt's Court of Appeals also ordered the dismissal and one-year imprisonment of Prime Minister Hesham Qandil. However, Mohamed Morsi, at a Republican Guard guesthouse in Salah Salem Street in the capital Cairo, did not accept the said military coup and has called on Egyptians to stand against the coup, as announced by the Egyptian Presidency. Morsi also said "I am still the president and chief of the army as well."

Egyptian Defense Minister Abdel Fatah El Sisi announced Adly Mansour , the head of the constitutional court, as the new interim president of Egypt until presidential elections are held and said this was part of a roadmap for the future of Egypt that also includes temporarily suspending the constitution and forming a coalition government of technocrats. He added that the new interim president would be able to issue constitutional declarations until the suspended constitution is amended through a special committee the interim president will form. Sisi said the roadmap stipulates holding early presidential elections. The defense minister also announced the formatting of a high committee for national reconciliation.

The powerful army establishment had given all parties, including President Mohammad Morsi, two days to thrash out a settlement for a political deadlock that brought millions of people onto the streets nationwide this week. It said otherwise would come up with a roadmap for the future of Egypt and supervise its implementation.

But Morsi went on state television late last night insisting he would not allow any institution, group or individual to undermine his constitutional authority, and ruling out any possibility of early presidential elections even if his life was the price. He offered to change the government, amend the constitution, speed up preparations for parliamentary elections and work on national reconciliation, if the opposition agreed on such a settlement.

Mansour, born in 1945, is the second member of the Constitutional Court to be named its president because ousted president Hosni Mubarak used to appoint court heads from outside its assembly membership. Mansour got his BA in law in 1967 from Cairo University. He taught in the General Administration Institute between 1975 and 1977, before being appointed to the State Council in 1984. He moved up the ladder until becoming Vice President of the State Council in 1992. Between 1983 and 1990 he worked as a legal advisor in the Saudi Trade Ministry. Mansour was appointed deputy head of the constitutional court in 1992 and remained in his post until he was chosen by the court assembly as new Constitutional Court head last May. He was supposed to assume his new post as of July 1, but now instead he would serve as interim president of Egypt until early presidential election is held.