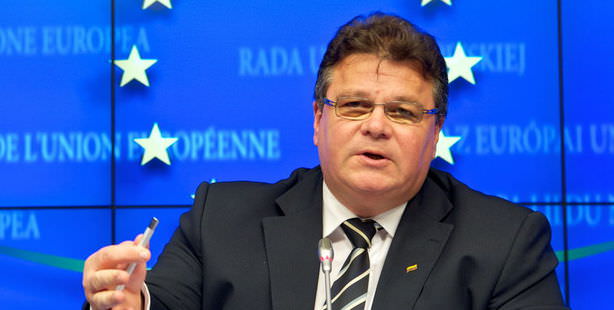 While the European Union (EU) continues to exhibit an uncritical stance of the military overthrow in Egypt and refraining from acknowledging it as a coup, term President Lithuania has adopted a stance siding with democracy.

Lithuanian Foreign Minister, Linas Antanas Linkevicius, whose nation holds the EU rotating presidency as of July, addressed the European Parliament Foreign Affairs Committee on the policy priorities of Lithuania on Tuesday. During the session, Foreign Minister Linkevicius was asked to comment on whether the EU endorsed the military coup in Egypt.

"WE CANNOT ACCEPT IT"

Portuguese Socialist MP Ana Gomes asked Linkevicius the following question: "In my country, people are asking me this same question, which I think is important. I have an answer myself; however I want to hear your answer. Did the European Union endorse the military coup in Egypt?"

Linkevicius responded by stating, "On Egypt, I still believe that the democratically elected government cannot be removed by military force. You can like it, you can dislike it but it is my position I would like to share with you. It is not a fact we should be proud of, try to explain, legitimize or to set a precedent on."

The 27-member bloc has expressed deep concern over violence in the country but stopped short of calling the military intervention a "coup", maintaining that the army had public support and acted to prevent bloodshed amid rising polarization in society.

After escalating protests, a military coup last week toppled the first elected president of Egypt Mohamed Morsi, after only a year in power.

Tension reached new heights in the country after the army opened fire on Morsi supporters demanding his release and return near an army compound in capital Cairo, where he is believed to be held. The shootings left at least 53 dead and hundreds wounded.