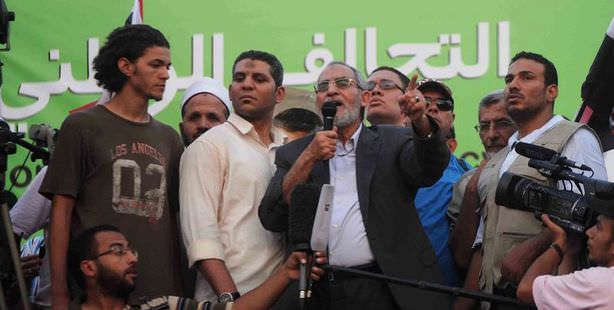 The Egyptian military, which has overthrown the nation’s first democratically elected President Mohamed Morsi, is now holding the leader and other senior figures of the Muslim Brotherhood responsible for the deaths of 51 people who were shot outside of the Republican Guards headquarters on Monday.

The Egyptian military has issued warrants for the arrest of the leader and other senior figures of the Muslim Brotherhood (Ihvan-i Muslimin) on charges of inciting violence outside the Republican Guards headquarters which left scores killed and wounded on Monday morning during Pro-Morsi protests.
According to Egypt's official news agency MENA, arrest warrants have been issued by the prosecution for the Muslim Brotherhood supreme leader Mohammad Badie and eight other senior figures in the movement for provoking the incidents and inciting violence which led to the deaths of 51 people.

Spokesman for the Muslim Brotherhood Gehad El-Haddad has since announced that no arrests have been made. "This is an attempt to disperse the sit-in at Rabaa Adawiya square and undermine the morale of the protestors," said Haddad adding, "This will not work. We are continuing our protests to unmask the tactics of the coup leader."

Tens of thousands of Morsi loyalists have been camping out in Rabaa Adawiya since the army ousted the democratically elected president last Wednesday. They insist that the elected president must be restored to office.

At least 51 supporters of ousted president Mohammad Morsi were killed and hundreds wounded outside the Republican Guards headquarters Monday morning. The Muslim Brotherhood accuses security forces of opening fire at its supporters while performing the Morning Prayer. But the army and the police insist that protesters attacked the vicinity of the Republican Guards headquarters and troops standing guard, killing two police officers and one army officer.

After Monday's events, 650 arrests were made, a majority of which were members of the Muslim Brotherhood. Meanwhile, formed by the Muslims Brotherhood, the Freedom and Justice Party has announced that they will not accept any proposal put forth by Egypt's newly appointed Prime Minister Hazem el-Beblawi to join the interim government.

High-level officials from the Muslim Brotherhood, who believe the sole solution is the reinstatement of Morsi, have also rejected an election timeline proposed by interim President Adly Mansour, who has set out plans to revise the constitution and hold fresh parliamentary elections in the coming months, with a presidential vote possible by early next year.

Turkish Ambassador: No evacuations yet

Turkey's Ambassador to Cairo Hüseyin Avni Botsalı recently commented on the issue of evacuating Turkish citizens from Egypt. "We have not yet reached the point of evacuation, however we are prepared in the case of an extraordinary situation," said Botsalı. "We issued the necessary warnings to citizens in Egypt prior to the situation in Egypt escalating to this level," said Botsalı adding that they have not called for an evacuation as of yet, however they were prepared if necessary.

Mass protests in Egypt began on June 30 calling for the resignation of President Mohamed Morsi. Following the protests, unrest was ignited in the country. Morsi was toppled by the Egypt armed forces on July 3, and the army announced the suspension of the constitution.