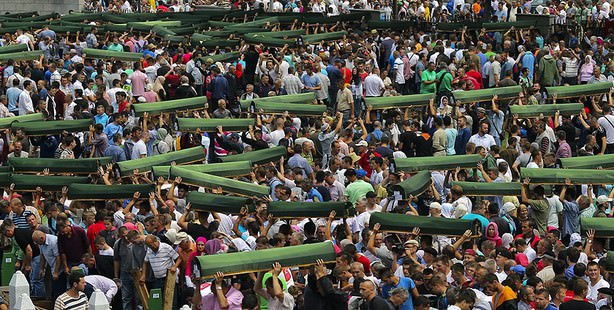 Minister of Culture and Tourism Çelik attended a funeral ceremony for 409 people held at the Potocari Memorial cemetery on the 18th anniversary of the Srebrenica massacre.

Turkish Minister of Culture and Tourism Omer Çelik on Thursday said, "Forgetting the past would be the worst thing done to the memories and souls of the genocide martyrs," in regards to the killing of 8,372 Bosniak men by Serbs in 1995.

Çelik attended a funeral ceremony for 409 people at the Potocari Memorial cemetery in Srebrenica on the 18th anniversary of the Srebrenica massacre.

Çelik began his speech by delivering the greetings of President Abdullah Gül and Prime Minister Recep Tayyip Erdoğan at the accumulator factory where thousands of defenseless Bosnians who sought refuge in the factory were given to the hands of Serbian forces led by Ratko Mladic, known as Butcher of Bosnia, by Dutch soldiers on 11 July 1995.

"The commemoration ceremony taking place on July 11 every year reminds us of our sorrow and the dreadful face of war and genocide. The incidents of Srebrenica are heart-wrenching. Srebrenica not only reminds us of sorrow and pain but also is a call to people to reach the merit and joy of living together. All nations should be aware of their responsibility for such incidents not to occur again. Forgetting the past would be the worst thing done to the memories and souls of the genocide martyrs," Çelik said. Emphasizing that Bosnia and Herzegovina had an exceptional place in the hearts of Turkish people, Çelik said Turkey attached great importance to the unity, peace and stability of Bosnia and Herzegovina. Reiterating Turkey's support to fellow Bosnians, Çelik offered his condolences to the families of the martyrs in his closing remarks.

July 11, 1995 marked the slaying of more than 8,000 Bosniak (Bosnian Muslim) boys and men, perpetrated by Bosnian Serb forces in Srebrenica, a town in eastern Bosnia-Herzegovina. In addition to the killings, more than 20,000 civilians were expelled from the area—a process known as ethnic cleansing. The genocide, which is the worst episode of mass murder within Europe since World War II, helped galvanize the West to press for a cease-fire that ended three years of warfare on the Bosnian territory. However, it left deep emotional scars on survivors and enduring obstacles to political reconciliation between Bosnia-Herzegovina and Serbia.