They filled the square with masks of Morsi 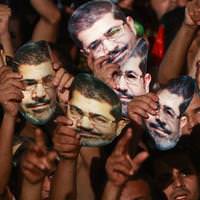 In the name of “rallying”, Morsi supporters in Egypt orchestrated a demonstration of “millions” in Rabiatul Adawiyah square. The protestors resisting the coup gathered in the square wearing Morsi masks and participated in the Friday prayer.

Supporters of President Morsi, who was overthrown by a military coup, staged a large rally on Friday for the deposed Egyptian leader. The coup's resistors congregated to participate in the Friday prayer together in the famous Rabiatul Adawiyah Square.

The demonstrators that gathered in Rabiatul Adawiyah Square demanded the dismemberment of the coup government and for the release and reinstating of President Morsi to office, who has been detained for weeks with no information of his whereabouts revealed.

Warning from the Military

The military issued a warning prior to the demonstration, stating, "Those who apply violence, and stray from the path of peaceful protesting shall be placing their lives in danger."