Invitation for coup supporters to take to the streets 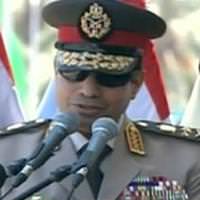 General Abdulfettah El Sisi called the supporters of the military coup to take to the streets against “terror”.

The general at the head of the Egyptian military, which overthrew Egypt's first democratically elected President Muhammad Morsi with a military coup, General Abdulfettah El Sisi called the supporters of the military coup to take to the streets against "terror". "I want the public on Friday to be given permission to intervene in events of possible terror and violence towards police officers" said Sisi. Since the coup on the 3rd of July till now, over 100 Morsi supporters have died in confrontations that occurred during their protests. The last deaths occurred in the capital of Cairo when two Morsi supporters heading towards the rally were assaulted with firearms, the assault killing 2.