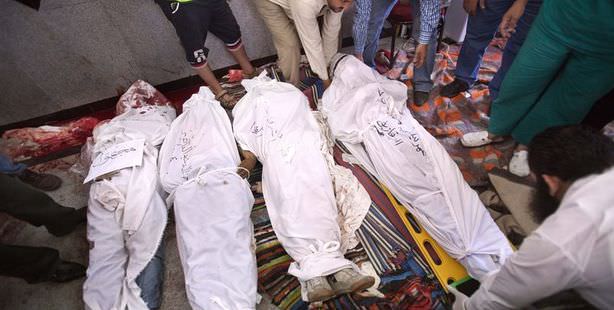 "We feel great sorrow for death of hundreds of people and wounding of thousands as result of tough and bloody intervention to the civillian and peaceful demonsrations in Egypt", said Turkish MFA

"We feel great sorrow for the death of hundreds of people and the wounding of thousands as the result of tough and bloody intervention towards the civillian and peaceful demonsrations yesterday in Egypt," said a statement released by the ministry.

The ministry said, "We vehemently condemn this fatal, unacceptable and unapprovable event, and wish for God's mercy for those who lost their lives and urgent recovery for those who were wounded."

"It is obvious that such interventions that cost lives will not contribute in our brother Egypt's peace and welfare," said the ministry, asserting that the human conscience could not accept opening fire on the protesters who make a claim to their own will and democracy.

"It is a requirement for internal peace of Egypt for the security forces, who where in charge of protecting all Egyptian citizens' life security in this sensitive period, to act within this consciousness responsibility," added the ministry.

Addressing also the protesters, the ministry said, "It is crucial that demonsrators, who until now expressed their righteous demands for return of democracy without applying violence, to avoid being dragged into provocations and leave peaceful methods."

The statement continued as follows: "The latest events in Rab'a al-Adaweya Square put forth clearly the importance of respecting Egyptian public's will and allowing peaceful demonsrators. Incorrect stances taken against civillian protests would not benefit the democratic transition period, and will create unpredictable outcomes for Egyptian people. The significance of transition to democratic administration based on constitutional legitimacy and public's free will has been once again understood by these events."

Finally the ministry said, "We believe that implementing an inclusive political process upon which all sides would agree is indispensable. Turkey is by the side of brother Egyptian public and ready for any kind of support in democratic transition process as always."