Warning to the PYD 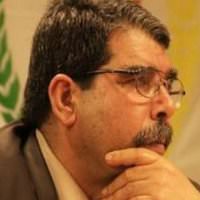 PYD leader Müslim, on his visit to Istanbul gave the message that “we don’t want tensions with Turkey.” Prime Minister Erdoğan warned that “if the PYD takes dangerous steps, MIT will warn them.”

Salih Müslim, the leader of the PKK's Syrian branch the PYD, made a surprise visit to Istanbul and met with MIT and Foreign Ministry officials. Müslim taking the "we don't want tensions" message out of his bag, was responded to with a warning from Prime Minister Recep Tayyip Erdoğan. In his meetings with Turkish officials. Müslim sent the message that "they do not want tensions."
"We will make our road map"

In the statement he made about Müslim's visit, Prime Minister Erdoğan said that "MIT is decisive on this issue, they themselves are making the necessary meetings. On the topic of the wrong and dangerous steps that they have taken, they will receive the appropriate warning. Prime Minister Erdoğan had this to say about Syria, "Our sensitivity on the topic of Syria continues. Last week we had a narrowly framed meeting. If necessary the chief of general staff, if necessary the Foreign Ministry, if necessary MIT are working on it. This week we will meet again. Based on the developments there we will spread it out on the table and we will re-evaluate our steps and make a road map" he stated. When mentioning the Turkish officials that met with Müslim regarding the Turkish red line that includes Syrian soil he emphasized, "The events that transpire on the border will not be allowed". He brought notice on the problems with the PYD forming an independent administration. He clearly stated to Müslim that Turkey had no problems with any group in northern Syria.

He requested assistance against mobs

It was learned that Müslim, during the meetings he attended stated that they were part of Syria and not a threat to Turkey. Müslim stated that meetings had undergone with the Syrian opposition, and that it was agreed that a temporary government that would be run by elected committees would be put in place. Separately he stated that after the end of the Assad regime that they would like to live together as an area in Syria along with the other ethnic groups. Müslim had this message: "Mobs in the area are taking civilians captive and plundering their houses. We want Turkey's support against these mobs. The Geneva gathering is important to us, we will attend as the Kurds. As Turkish and Syrian Kurds are family, we have blood connections. The government should also acknowledge us. Permission to open the border gates between Nusaybin and Ceylanpınar should be opened to allow the passing of human aid.

Trust that he would not be arrested

It was learned that Müslim, while staying at the palace of Mesud Barzani during the International Kurdish Convention, had met with Foreign Ministry and MIT officials sending the message to Ankara that "they did not want tensions. On the topic of his "security and the case of him not being arrested" through the assistance of the Erbil consulate Müslim came to Istanbul.

The flag was lowered

During his visit to Istanbul Salih Müslim found it comicated to relate his concerns about the sensitivity towards the topic of the Turkish sensitivity towards the PYD flags on the border. Yesterday the PYD flags hung from a tall building in the Rasulayn region were lowered. In its place the flag of the legitimately viewed International Syrian Kurdish flag was hung. In the meantime the confrontations between the PYD and the El Nusra Front sporadically continued in the Rasulayn region. The precautions of security forces in the area still continues. The trenches opened for the time in the area were filled with soldiers taking turns on lookout, allowing control over border crossings by Syrians looking to pass into Turkey.

Translated from an article by HAZAL ATEŞ on SABAH