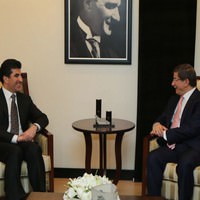 According to diplomatic sources, Davutoğlu's closed meeting with Barzani focused on bilateral relations, recent incidents in Iraq, the situation of Syria, the Kurdish National Conference and the recent developments and incidents in Egypt.

The two leaders discussed bilateral relations as well as energy and cooperation opportunities, and they expressed uneasiness over escalating violence and terrorism in Iraq.

Diplomatic sources said that the recent developments in Syria were also high on the agenda of the meeting, adding that both parties exchanged views about the situation in Syria especially the developments in the north of the country.

Parties agreed that Turkey and the regional administration in Iraq had a common stance and concerns about the recent developments in Syria and its north.

Sources said that Barzani had a similar stance as Turkey regarding the future of Syria, and he gave the message that they did not want a division in the country.