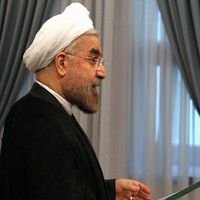 Presidents, foreign ministers and their representatives were invited to Rouhani's inauguraion, the first since Iran's 1979 Islamic revolution.

Leaders and other representatives from more than 50 countries, including Syria, North Korea, Venezuela and Russia, mostly from the region, attended the ceremony.

Davutoglu greeted Rouhani and they had a short conversation.

Davutoglu is expected to meet with Rouhani on the fifth of August.