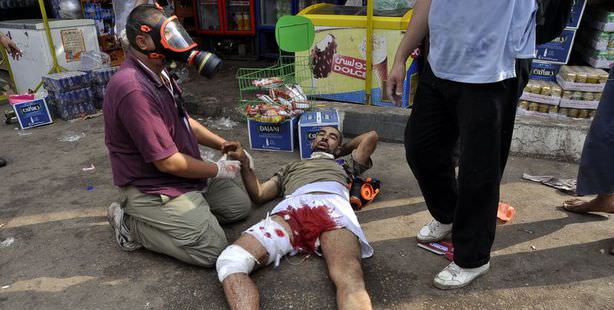 Al-Beltagi, a leading figure of the Muslim Brotherhood and its Freedom and Justice Party, said more than 300 people had been killed in the forcible dispersal of two sit-ins staged by supporters of ousted President Morsi

Mohamed al-Beltagi, a leading figure of the Muslim Brotherhood and its Freedom and Justice Party, said more than 300 people had been killed in the forcible dispersal of two sit-ins staged by supporters of ousted President Mohamed Morsi.

"Bullets are raining down on our heads," al-Beltagi told supporters who remained inside the besieged protest site. "More than 300 people have been killed."

He appealed to the Egyptian people to take to the streets in a show of solidarity with slain pro-Morsi demonstrators.

In the early hours of Wednesday, security forces moved in to forcibly disperse two six-week-old sit-ins in Cairo and Giza staged by Morsi supporters.

According to medics and eyewitnesses, at least 163 people have been killed and thousands injured.

The Egyptian Ambulance Organization, however, has put the number of people killed in the two squares at ten.

The Interior Ministry said three policemen had been killed in the violence.

Al-Beltagi has appealed to the international community to intervene to halt what he described as "massacre" of supporters of ousted President Mohamed Morsi.

"They are dealing with us as if we were fighting a war," al-Beltagi told the Anadolu Agency on Wednesday.

According to medics and eyewitnesses, at least 163 people have been killed and thousands injured.

The Egyptian Ambulance Organization, however, has put the number of people killed in the two squares at 13.

"Military facilities near the protest camp, which we never touched for weeks, are now being used by snipers to shoot at us," al-Beltagi said.

"Live ammunition has been fired at [demonstrators'] chests and heads from aircraft and tanks for the past four hours," he said.

"Ambulances are not allowed into the square and medical supplies at the field hospital have been torched," al-Beltagi added.

He urged Egyptians "to take to the squares and streets to support the protesters in Rabaa and Nahda."

There was no immediate reaction from the police or army regarding al-Beltagi's assertions.

A state of cautious calm prevailed in Nahda Square, where thousands of supporters of ousted President Mohamed Morsi used to hold a major sit-in, after police forcibly dismantled the camp.

Anadolu Agency correspondent reported that the protesters were dispersed to the nearby streets, as police moved in to remove the protesters' tents in the square.

A number of protesters are trying to assemble outside nearby al-Isteqama mosque to try to push their way back to the square.

"We would not give up our right to peaceful defense of the popular will and the democratic path," a protester said.

Eyewitnesses said dozens of protesters were arrested in the assault.

Egyptian troops are besieging hundreds of supporters of ousted President Mohamed Morsi inside the Faculty of Engineering, which is located close to Nahda Square.

"There are at least six people killed and tens wounded," one of the protesters told the Anadolu Agency.

"The bodies are still on the ground inside the Faculty building," she said, asking not to be named for fear of arrest.

A number of supporters of ousted President Mohamed Morsi converged on a main square in the coastal city of Alexandria to protest the forcible dispersal of two major sit-ins by pro-Morsi protesters in Cairo.

Eyewitnesses said protesters gathering in Rabaa al-Adawiya Square in central Alexandria chanted slogans against the Interior Ministry and blocked the vital cornice road in both directions.

Egypt's railway authority said Wednesday that the Interior Ministry ordered a halt to all railway services to Cairo, hours after police moved in to forcibly disperse two major sit-ins by supporters of ousted President Mohamed Morsi in Cairo and Giza.

"The decision came upon a request by the Interior Ministry in parallel with the dispersal of pro-Morsi protests," sources with the Transport Ministry told the Anadolu Agency.

"Troops stationed in the vicinity of Rabaa al-Adawiya Square include both riot police and special forces; but only the riot police, who are unarmed, are dealing with the protesters," he told Anadolu Agency.