Turkey to provide non-lethal support for international coalition against Syria 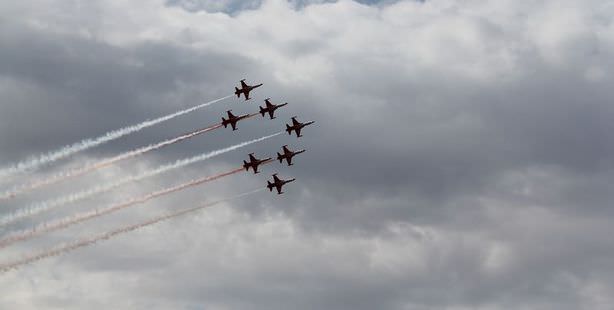 Turkey will provide non-lethal aid to the international coalition against Syria by carrying out reconnaissance flights and giving intelligence on possible Syrian targets but will not actively participate to military operation.

The Turkish military will support the coalition forming against the Assad regime, accused of chemical weapons against civilians at a Damascus suburb. Six F-16s and ground based surveillance radars are ready to begin intelligence gathering over Syria, sources told SABAH.

Turkey already has necessary authorization from the parliament for using its forces abroad but the government may seek a broader mandate by drafting a new resolution on Syria.

Sources described Turkey's role as very similar to the one in Libya. Turkish military ships had rescued hundreds of wounded and brought them to Turkey for treatment and had patrolled the coast during the military operation.

It is learned that Turkish forces, NATO's second largest, will be used in conjunction with other allied armies. Turkish F16's will not carry out strikes but will gather intelligence. Turkey will also protect aerial surveillance planes, AWACS, which will have a very critical role on the deployment of the Syrian air force.

Analysts are interpreting Turkey's response to international coalition as "encouraging."

Mehmet Ozkan, an expert on Turkish and European diplomacy and also a researcher for a Turkish think thank close to the government (SETA) said, "Since the beginning of the Syrian crisis, this is the first time Turkey has seen that the international community is serious about doing something to stem the crisis. Therefore, Turkey sees this as an opportunity and eager to support to international community. I think what is more important for Turkey is not to face a new Kosovo scenario alone, but transform this cooperation into a political solution or at least, progress in that direction."

Turkey also considering to use it naval forces for humanitarian assistance in Syria. The Turkish Sea Task Group (TDGG) that consists of four frigates and one fuel ship will be helping civilians if needed.

The operational base of the international coalition is still undetermined. A Greek newspaper report claimed the United States has requested the use of the navy base of Souda in Crete and the airport of Kalamanta in the southern Peloponnese for possible military action against Syria. Greek Foreign Ministry spokesman Konstantinos Koutros refused to comment on the report today but Greek media are reporting an increase in aerial military traffic in the Greek airspace for the past few days.

According to an intelligence report uncovered by Wikileaks dated early 2012 from STRATFOR, a controversial global intelligence company, in a possible operation against Syria, allies, especially Britain and France, would use the bases in Cyprus, despite any Turkish objections. The report notes that US officers are "pissed off" at Turkish military experts due to their reluctance to participate in the military campaign as well.

The reason behind Turkey's decision to provide non-lethal support for the international coalition forming against Syria is unwillingness to use force against Muslim countries.

Saban Kardas, an associate professor of international relations at TOBB University of Economics and Technology in Ankara, said, "Turkey didn't clearly explain the cause behind its reluctance to take an active military role. But if we remember Libyan operation, we can clearly see that Turkey doesn't want to use any military force against a Muslim majority country. The same set of priorities was at the forefront during its participation in the international force in Afghanistan."