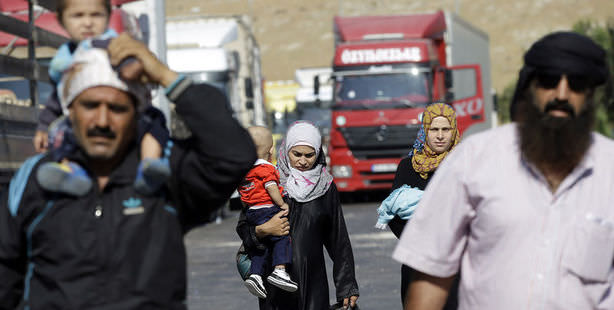 That the number of Syrian refugees has exceeded a staggering two million, according to UN High Commissioner for Refugees Antonio Guterres, is the greatest tragedy of this century.

As the number of Syrian refugees has exceeded a staggering two million, UN High Commissioner for Refugees Antonio Guterres says this is the greatest tragedy of the century.

In a written statement, Guterres said the only conciliation in this tragedy were the neighboring countries that welcomed those refugees, which is a great burden for their infrastructures, economies and societies. Guterres added that 1.8 million people have been forced to leave Syria within the last year.
Underlining the fact that many people have had to leave Syria with only the clothes on their backs and nothing else, the UN High Commissioner pointed out that neighboring countries need support in order to be able to overcome this crisis.

Antonio Guterres further said that half of this number were children and added, "More than anything we need those with the ability to stop this conflict and those who can influence them to find a political solution before more children suffer. One million refugee children, one million reasons to act now. We surely cannot continue to fail the children of Syria."

In the statement, Angelina Jolie, famous American actress and a special envoy for UN High Commission for Refugees, was also quoted as saying that there is no doubt that the world needs to do more to end the crisis as five thousand Syrians are displaced daily.

The UNHCR statement by Guterres also said a meeting will be held in Geneva on September 4 to stress the importance of international support to Turkey, Iraq, Jordan and Lebanon; the four countries sharing the 2 million Syrian refugees between them. The meeting, which will be held at a ministerial level; will be attended by Turkish Foreign Minister Ahmet Davutoğlu.