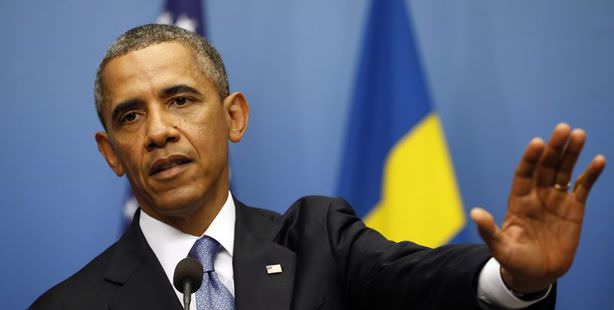 The U.S. Senate Foreign Relations Committee approved a resolution on Wednesday authorizing limited U.S. military intervention in Syria. Following the vote, U.S. President Obama called on the world to not remain silent to the “barbarism” of using chemical weapons and insisted that a retaliatory strike on Syria was crucial.

The U.S. Senate Foreign Relations Committee voted 10-7 in favor of a compromise resolution that sets a 60-day limit on military action in Syria and excludes the use of U.S. troops for ground operations. U.S. President Barack Obama commented on the vote from Sweden on Tuesday prior to his departure to Russia to attend the G20 summit.

Speaking at a press conference with Sweden's Prime Minister Fredrik Reinfeldt, Obama said the world cannot remain silent to the "barbarism" of chemical attacks in Syria. "I discussed our assessment which clearly implicates the Syrian government in this outrage. The prime minister and I are in agreement that in the face of such barbarism the international community cannot be silent and that failing to respond to this attack would only increase the risk of more attacks and the possibility that other countries would use these weapons as well." Obama vowed that the U.S. would not repeat the mistakes made in Iraq and expressed his confidence that he will receive U.S. Congress backing.

The 10-7 vote carries the measure to a full Senate vote, expected next week

The U.S. Senate panel voted to authorize use of force in response to last week's deadly chemical weapons attack in Syria ahead of a Congress vote next week, as domestic support for a US-led military operation grows.

The measure prevents deploying US troops on the ground. The Senate panel's approval comes as a further indication for the broad backing President Obama seeks to have in Congress, after already garnering support from several key Republican leaders, including House Speaker John Boehner. Congress will reconvene on Monday next week, when a vote is expected to portray the MPs final decision on President Obama's plan. State Secretary John Kerry had testified on Wednesday in front of a foreign affairs committee along with Defense Secretary Chuck Hagel and Chief of Staff General Martin Dempsey. Kerry laid down the case for a "targeted and limited" military strike to punish the Syrian government for the gas attack that the US says killed nearly 1,500 people.

'THE WEST IS BLUFFING AND WILL NOT STRIKE'

As the countdown continues for potential U.S. military action in Syria, the troubled nation's leader Bashar Assad is drawing attention for his "relaxed" attitude during this period of heightened tension. An article released in The New York Times entitled "Assad Wages War Shielded with a Smile", points out that last week Assad provided jovial interviews as he hosted delegations from Yemen and Iran and in effect is trying to deliver the message that nothing is amiss and that he is not in hiding.

The report writes that as Damascus is tense "with streets deadly quiet, residents stockpiling food, wives and children of the elite sent hastily abroad," underneath Assad's 'normal' façade, the Syrian leader is actually becoming more aggressive. Meanwhile, speculation is that behind Bashar Assad's stance of ease is the belief that his country will not be subjected to international military intervention. Supposedly, Assad is telling those in his close circles that the West is "bluffing" and will not actually attack.