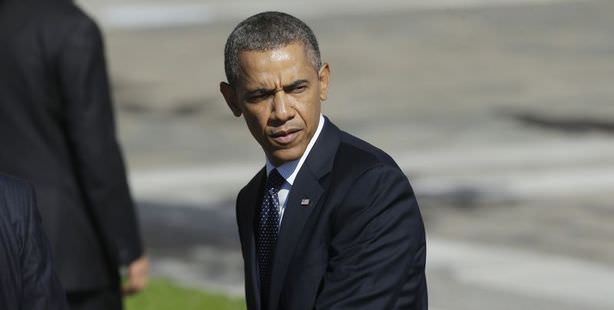 At a press conference held on Friday, U.S. President Obama said that most G-20 leaders agreed that Assad launched the August 21 chemical weapons attack, but were divided over whether to use force in Syria without U.N. Security Council support.

At a press conference held on the final day of the G-20 summit in St. Petersburg, Russia, U.S. President Barack Obama said that most leaders of the G20 countries agree that Syrian President Bashar al-Assad is responsible for using poison gas against civilians as the U.S. leader tried to rally support at home and abroad for a military strike.

Speaking to reporters on Friday during which he also had the opportunity to meet with Prime Minister Recep Tayyip Erdoğan, U.S. President Obama said the leaders of the world's largest economies agreed that chemical weapons were used in Syria and that the international ban of chemical weapons needs to be maintained. However, he said there was disagreement about whether force could be used in Syria without going through the United Nations.

US President remains firm on action in Syria, points to "limited and proportional" operation

Obama also told the G20 leaders that it was important to uphold international norms against chemical weapons and depicted the Security Council as paralyzed. "Given Security Council paralysis on this issue, if we are serious about upholding a ban on chemical weapons, then an international response is required, and that will not come through a Security Council action," he said. There would be "no long-term solution" without massive amount of troops, Obama said, which the countries in the international community "aren't signing up for". In reiterating his determination for military action against the Syrian government, Obama described a possible operation as "limited and proportional" while dismissing allegations of "mission creep" in Syria.

"My goal is to maintain the international norm banning chemical weapons," said Obama adding that there was a "growing recognition that we cannot stand idly by" on last month's chemical attack in Syria. "Over 1,400 people were gassed. Over 400 of them were children. This is not something that we fabricated. This is not something we're using as an excuse for military action," Obama said.

The United States has been unable to win U.N. Security Council approval for military action against Syria because of the opposition of veto-wielding Russia. "The majority of the room is comfortable with our conclusion that Assad and the Assad government, was responsible for their use," he said at the news conference, adding that this is disputed by Russian President Vladimir Putin. Regarding his dialogue with Russian President Vladimir Putin, Obama said he did not expect Putin and himself to agree on action in Syria, but described his conversation with Putin on the margins of the G-20 meeting as "candid and constructive."

President Obama on Friday declined to speculate whether he would go ahead with a military strike in Syria if Congress votes against authorizing it, saying he would try to convince Americans and lawmakers of the need to act against the government of President Bashar al-Assad. "I put it before Congress because I could not honestly claim that the threat posed by Assad's use of chemical weapons on innocent civilians and women and children posed an imminent, direct threat to the United States," Obama said in a news conference at the G20 summit in St. Petersburg. If there had been a direct threat to the United States or allies, Obama said he would have taken action without consulting Congress.