The world weighs in on Russia’s proposal 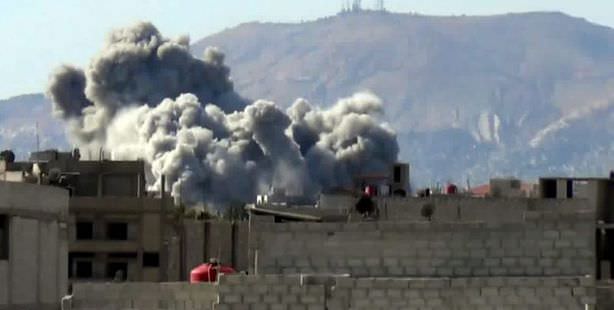 Russia’s proposal for Syria’s chemical arms stockpile to be placed under international control has drawn worldwide support. The U.S. and European nations are seeking a serious commitment to this next step, which they stress should not be just a “maneuver.”

While the entire world was entrenched in debate weighing out potential military action by a U.S.-led coalition, a proposal put forth by Russia on Tuesday for the Assad regime to hand over their chemical arms stockpile to international control has suddenly altered the global agenda.

After meeting with Russian Foreign Minister Sergei Lavrov in Moscow, Syrian Foreign Minister Walid Muallem announced that they have accepted Russia's proposal to allow international control over their chemical arms stockpile and are willing to sign the Chemical Weapons Convention. Speaking in a television interview, Muallem announced Syria was willing to give up its chemical weapons arsenal by stating, "Damascus wants to join the Non Proliferation Treaty and is ready to implement Russia's proposal." Muallem said that the country welcomed Russia's suggestion that it should place its chemical weapons under international control, a move designed to avoid possible US air strikes.

Syrian Prime Minister Wael Nader Al-Halqi also announced on Syrian state television that Damascus has accepted Russia's initiative. Meanwhile, Russian Foreign Minister Lavrov announced on Tuesday that they were working on an "effective, clear and concrete plan" with Syria officials that they will be presenting to the international community as soon as possible.

The diplomatic solution suggested by Russia's President Vladimir Putin would require Syria's government to dispose its entire chemical arsenal or to place the weapons under international control. U.S. President Obama is stated to have had prior knowledge of Russia's proposal. In an announcement from the Kremlin, it was noted that U.S. President Obama and Russian President Vladimir Putin discussed the initiative at the G-20 Summit held in St. Petersburg last week. Obama said on Tuesday in a televised speech that it was "too early to tell" if the Russian proposal would succeed, but that he was open to giving it a chance.

US President said he asked US lawmakers to postpone a vote on military strikes against Syria, which he advocated to punish the government of President Bashar al-Assad for its use of chemical weapons on Syrian civilians. "I have therefore asked the leaders of Congress to postpone a vote to authorize the use of force while we pursue this diplomatic path," Obama said.

U.S. Secretary of State John Kerry said on Tuesday that this process must not be a "delaying tactic," adding, "I have said in several conversations with Foreign Minister Lavrov, that this cannot be a process of delay, this cannot be a process of avoidance, that it has to be real, it has to be measurable and tangible. US Secretary of State Kerry will meet with Russian FM Lavrov on Thursday in Geneva to discuss a potential deal.

No delays in Europe releasing positive responses to Russia's proposal…

French Foreign Minister Laurent Fabius announced that it would present to the UNSC a "draft resolution asking Damascus to unveil its chemical arsenal," and emphasized that international control and disposal of the chemical weapons possessed by the Syrian regime, "cannot be used as a maneuver by the Assad regime to divert us."

German Foreign Minister Guido Westerwelle has announced support for Russia's proposal, and has said they are ready to provide assistance, while German Chancellor Angela Merkel described the Russian suggestion of Syria handing its chemical weapons to international surveillance as an "attractive offer."

British Prime Minister David Cameron said that the Russian proposal was something definitely worth exploring and stressed, "But we must be careful, we must enter this with a very hard head and some pretty cool calculations. Of course we should be skeptical; of course we should not forget a war crime has been committed." Cameron also announced that Britain, France and the U.S. would present a draft resolution to the UN Security Council in New York on Tuesday.

As the developments ensued, UN Security Council Term President and current Permanent Representative of Australia to the UN Gary Quinlan called an emergency closed-door UN Security Council meeting on Syria for Tuesday, which he later cancelled citing a withdrawal of the request to convene. However, Quinlan did not state which country demanded the cancellation of the meeting. Diplomatic sources stated that it was Russia who requested and withdrew its request for the UNSC meeting.

A disagreement between the Western permanent members of the UN Security Council and Russia has been ongoing. The US, UK and France want a binding UN resolution to back them up with the threat of force. The Russian side, which first proposed that the Syrian chemical stockpile be placed under international control, disagrees and does not want to include a timetable and threat of force in a resolution.

Russian President Vladimir Putin said Tuesday that Syria's chemical weapons handover will only work if the US renounce the use of force against Syrian regime. "Of course, all of this will only mean anything if the United States and other nations supporting it tell us that they're giving up their plan to use force against Syria. You can't really ask Syria, or any other country, to disarm unilaterally while military action against it is being contemplated" Putin said.

Foreign Minister Ahmet Davutoğlu is critical of the Russian proposal and has stated that embarking on this "cosmetic move" of having Syria surrender its chemical weapons, in the name of ignoring the grave crimes already committed, will allow the regime to gain time as it will take months to not only conduct an inventory but also to transfer the weapons. Davutoğlu emphasized that granting this time would only be lighting a green light for Assad to stage further massacres in the future.

A 22-page report released by Human Rights Watch (HRW) on the chemical attacks that took place in Ghouta on August 21 states that the available evidence strongly suggests that Syrian government forces were responsible for the attack. HRW announced that although they were unable to enter Ghouta, the samples brought in from the region as well as technical support from an expert on the detection and effect of chemical warfare agents assisted them in reaching their conclusion.