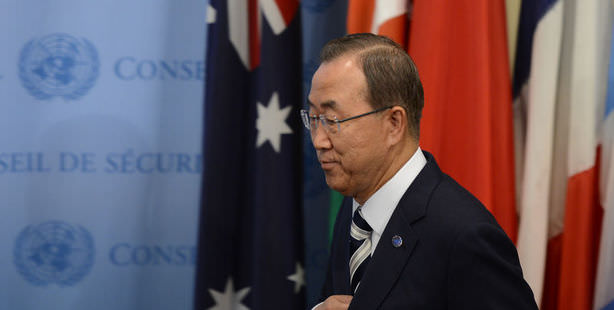 UN Secretary General Ban Ki-moon announced on Thursday that Turkey will be the host of the first-ever World Humanitarian summit to be held in 2016.

Speaking at a high-level meeting on humanitarian aid held parallel to the United Nations General Assembly, UN Secretary General Ban Ki-moon announced that they have decided that Turkey will be the country to host the first-ever World Humanitarian Summit to be held in 2016. Expressing his gratitude to all of the other countries that offered to host the event, especially Switzerland, which had expressed serious intentions, Ban Ki-moon stated, "After careful consideration, I have decided to accept the Turkish Government's offer to host the summit in Istanbul," adding, "I would like to congratulate them."

Noting that more than 450,000 Syrian refugees have sought shelter in Turkey, while also pointing out that in 2011 Turkey suffered a devastating earthquake in Van which led to significant loss, Ki-moon stated, "So, today, I ask you to join me in thanking Turkey for its generous offer to host the first World Humanitarian Summit."

Ban explained that the summit, which he said would be much more than an event, will be held for the first time in 2016. Stating that they will begin preparations in the years leading up to the meeting, Ki-moon said that they will be exerting efforts to work on how to provide aid and emergency intervention and to ensure those in most need have access. Ki-moon explained that regional meetings coordinated by humanitarian aid foundations will be held in preparation of the summit, which he requested be widely attended by all nations present.

Ki-moon also announced that he will be holding an humanitarian aid conference for Syria in January.