Led by a Turk, the OPCW wins Nobel Peace Prize 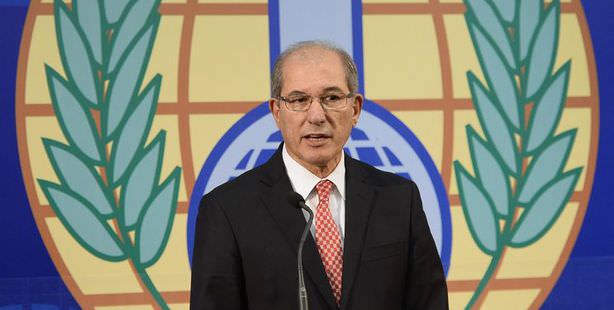 The Organization for the Prohibition of Chemical Weapons (OPCW), the global chemical weapons watchdog tasked with overseeing the eradication of Syria’s chemical arms stockpile won the Nobel Peace Prize it was announced on Friday. Director General is Ahmet Üzümcü says the award is a great honor that will only inspire his group to show even stronger commitment and greater dedication.

The Organization for the Prohibition of Chemical Weapons (OPCW), the global chemical weapons watchdog tasked with overseeing the eradication of Syria's chemical arms stockpile, was named this year's Nobel Peace Prize the Norwegian Nobel Committee announced on Friday. The Hague-based OPCW is working for the United Nations on destroying Syria's chemical weapons arsenal, as a result of a resolution made in response to the deaths of over 1,400 in a sarin gas attack staged in the Ghouta suburb of Damascus.

Commenting on what he said was a "great honor" during a news conference in The Hague, OPCW Director General Ahmet Üzümcü stated, "I hope this award will result in peace in Syria." Üzümcü also said that this prestigious award will only inspire the organization to stronger commitment and greater dedication and pointing out that the Chemical Weapons Convention is nearly universal with only six nation's absent, expressed his hope that the prize will provide additional encouragement to those who have not yet signed on to the convention's global membership.

In line with the UN Security Council resolution on Syria, the OPCW aims to eradicate Syria's chemical weapons arsenal by mid-2014. Turkish diplomat Ahmet Üzümcü has served as the OPCW director general since July of 2010. The $1.25 million prize will be presented to the OPCW in Oslo on December 10th, the anniversary of the death of the Nobel awards founder Alfred Nobel.
Last Update: Oct 11, 2013 5:06 pm
RELATED TOPICS