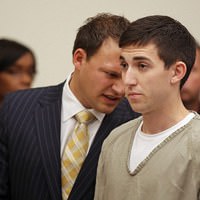 A 22-year-old Ohio man who confessed in an online video to killing a man in a drunken driving crash was sentenced on Wednesday to 6-1/2 years in prison.

A 22-year-old Ohio man who confessed in an online video to killing a man in a drunken driving crash was sentenced on Wednesday to 6-1/2 years in prison.

Matthew Cordle, who lives in the Columbus suburb of Dublin, Ohio, had pleaded guilty on September 18 to aggravated vehicular homicide and driving a vehicle under the influence of alcohol at the time of the wrong-way highway crash that killed Vincent Canzani, 61, in June.

The case gained national attention after Cordle posted on the Internet a 3-1/2-minute video confession titled "I killed a man" in which he admitted to drinking until he blacked out and promised to plead guilty to the charges against him. He had faced up to 8-1/2 years in prison at his sentencing before Franklin County Judge David Fais.

"I'm so sorry for the pain I have caused you," Cordle said before he was sentenced in the courtroom where Canzani's family sat.

"It should have been me who died, the guilty party." Vincent Canzani's daughter, Angela Canzani, told the court her father was a photographer and talented artist with five grandchildren who can never look forward to another holiday with him.

Cordle admitted that he tried to drive 20 miles to his home on June 22 after four hours of heavy drinking and was driving the wrong way on a highway off-ramp when his truck hit Canzani's vehicle.

Prosecutors had sought an eight-year sentence for Cordle, whose blood alcohol content was more than twice Ohio's 0.08 limit. Defense attorneys asked for a shorter sentence, saying he was not a risk to re-offend and had no prior criminal record.
Reuters