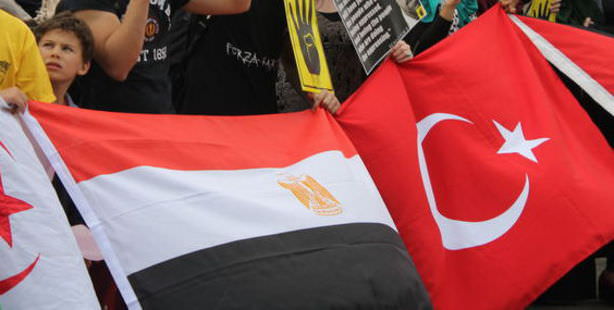 The Egyptian Foreign Ministry announced that they have downgraded ties with Turkey and withdrew its Ambassador to Ankara on Saturday.

The Egypt coup regime's Foreign Ministry Spokesman Badr Abdel Aaty announced on Saturday that they have downgraded ties with Turkey and have recalled the Egyptian Ambassador to Ankara.

The Egyptian Foreign Ministry Spokesman also announced that they have summoned the Turkish Ambassador, who is now persona non grata, and asked him to leave.

The statement issued by the ministry spokesman on Saturday announced that the decision was made following remarks made by Prime Minister Recep Tayyip Erdoğan on November 21, prior to his departure for Moscow, which they claimed were provocative and meddled in Egypt's internal affairs. As a result, the statement announced that diplomatic relations with Turkey have been downgraded from ambassadorial to charge d'affaires level. Egypt's Ambassador to Ankara, who was recalled for consultations on August 15, has been permanently withdrawn. Turkey's Egypt Ambassador was summoned to the Foreign Ministry on Saturday, told that he was persona non-grata, and asked to depart the country.

Gül expresses hope relations will be back on track soon

President Abdullah Gül was the first to comment on the Egyptian Government's summoning of the Turkish Ambassador by stating, "I hope that relations will be back on track soon."

In response to a question regarding Egypt requesting the Turkish Ambassador's departure, President Gül stated, "I don't want to comment much on this issue. This is an extraordinary period there. This situation is a temporary conjectural issue between Turkey and Egypt. We hope that Egypt will transition into democracy."

Describing Turkey and Egypt as being the two sides of the Mediterranean's apple, Gül stated, "There was a great nation in the south that was Egypt and a great nation in the north that was Turkey. Throughout history we have upheld significant relations." Expressing how saddened he is by the developments in Egypt, Gül shared his hope that relations will get back on track again soon.