A historical deal with Iran reached in overnight deliberations in Geneva 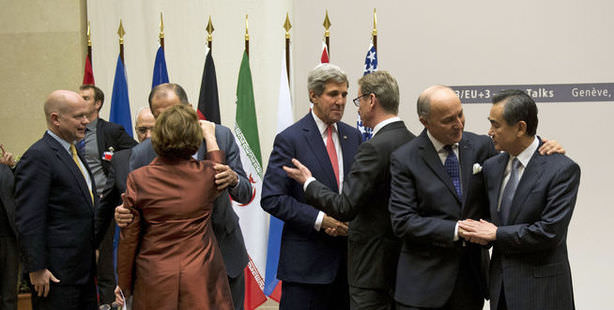 The international community took a historical stride on Sunday after deliberating into the night to establish a breakthrough interim accord which allows a six-month period of limitations to Iran’s nuclear program including allowed inspections and establishing joint parameters on uranium enrichment, in exchange for the lifting of up to $7 billion worth of sanctions.

Deliberations between Iran and the United Nations Security Council P5+1, the five permanent members plus Germany, went long into the night on Sunday in Geneva until a historical deal was finally brokered at four-thirty a.m.

The negotiations on Tehran's nuclear program ended with a consensus reached on establishing a temporary six-month accord. Accordingly, Iran will make concessions in its nuclear program and will take transparent initiatives on the matter, while the U.S., especially, will be joined by other European nations in lightening the economic sanctions currently in place on Iran.

The third leg of the Geneva negotiations commenced on November 20 with the participation of EU Foreign Policy Chief Catherine Ashton and Iranian Foreign Minister and chief negotiator Mohammad Javad Zarif. When the negotiations, which were planned to last three days, failed to reap the desired results, on Friday, Russian Foreign Minister Sergey Lavrov arrived to Geneva followed by the arrivals of foreign ministers from the U.S., England, France, China and Germany. Negotiations continued that night behind closed doors with an agreement reached between the parties at approximately four-thirty Sunday morning.

According to the deal, the Iranian side has agreed to halt all enrichment activities that surpass the five percent rate, which suffices for Iran's electricity production. In addition, Iran has agreed to decrease the purity of its 20 percent enriched uranium stocks. Production at the nation's uranium centrifuge will be halted and activities at the Arak nuclear center, which France was insistent in taking measures on, will also be discontinued.

Iran will allow expert teams to be sent by the International Atomic Energy Agency (IAEA) to freely inspect all nuclear engagements, which will ensure the international community remains informed on whether or not Iran advances to producing nuclear weapons. In return for Iran's concessions, the long-standing economic sanctions and embargoes will be lifted to a degree to ensure Iran economic relief. The White House states that the accord on Iran's nuclear program will be a controlled, temporary, retractable and limited ease on sanctions, which according to calculations will translate to facilitating up to $7 billion. There will not be any slackening on petroleum embargoes issued on Iran; however, a number of limitations on the gold, precious metals, petrochemicals and automotive sectors will be lifted. Specialists however point out that Iran's suffers the highest income loss through the sanctions on its gas sector. Due to the tight embargo on petroleum exports, Iran suffers an average $5 billion revenue loss monthly.

THE SANCTIONS TO CONTINUE

The 100 billion dollars worth of Iranian assets abroad, will continue to be closed or limited to access. The limitations in place on approximately 20 banks, including the Iranian Central Bank, operating in international markets will continue. The international community are referring to the accord reached in Geneva as a "historical opportunity" and "the first stride taken to ensure a safe future." Should Iran fulfill its obligations dictated by the six-month interim accord, economic sanctions on the nation will then be significantly lifted. Speculation is that this development will result in decreasing Tehran's isolation in the international arena.

Iran, Russia, China and France comment on the landmark accord

Known for his reformist stance, Iranian President Hassan Rouhani , announced to the Iranian public, "World powers have recognized the nuclear rights of Iran. The confirmation from the great powers is of huge value. No matter what interpretations are given, Iran's right to enrichment has been recognized," said Rouhani, adding, "trust is a two-way street." Rouhani also expressed that the accord shows that the world has realized that exhibiting respect for the Iranian public will reap positive results while sanctions and threats no longer have a function.

Russian President Vladimir Putin referred to the results reached in Geneva as a "win-win for all sides."


French President François Hollande welcomed the agreement as "an important step in the right direction," and hailed the accord reached in Geneva for its progress to "stop Iran's nuclear weapons program, and towards the normalization of relations with Iran."

United Nations Secretary General Ban Ki-moon also released an announcement commending the momentous deal, which he referred to as "a historical agreement and a new start for the Iranian public, the Middle East and other nations." The Chinese administration also welcomed the development, which they stated was "an important step for reaching a diplomatic solution."

Turkish Foreign Minister Ahmet Davutoğlu offered Turkey's support to the interim accord through staging silent diplomacy. For the past two weeks, Foreign Minister Davutoğlu has been making calls to his Iranian, U.S., Russian and British counterparts to discuss the significance of the potential deal.