A view of Tehran following the nuclear agreement 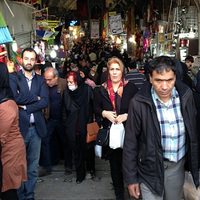 The agreement reached by the permanent members of the UN Security Council, Germany and Iran has produced a guarded atmosphere of optimism in Tehran.

The promise of economic turnaround as a result of the agreements are very important to the public depressed due to sanctions. In Tehran, where we arrived following visits to Qatar and Bahrain alongside Foreign Minister Ahmet Davutoglu, we observed how the nuclear agreement has impacted life on the streets. The people of Iran, due to years of depression caused by sanctions, seem at peace with the chaos, especially in traffic, that surrounds them. Scheherazade, our official guide, told us that in recent years people were forced to leave their cars at home, riding more economical motorcycles in short commutes instead. However, total disregard of traffic rules by motorcyclists, compel people to protect themselves rather than abide by the rules.

It is possible to say that Iranians carry a cautious optimism regarding the nuclear agreement. For the Iranian people, most of whom believe they have for years been cheated by the United States and the West, and who have faced struggles within their daily lives due to the sanctions, the economic relief expected by the agreement is very important. Iranian President, Hassan Rouhani, underlining the agreement from an economic stand point, leaves little for the opposition to say. Tangible improvements in the lives of the ordinary people serves to lighten the criticisms faced by the government of Iran. Religious leader, Ali Khamenei, probably is forced to support the deal due to the same reasons.

Amongst politicians, none have openly opposed the agreement, for now. Undoubtedly, Khamanei's stance concerning the agreement played a large part in this silence. Everyone, especially Khamanei, sees that Iran is rapidly headed towards economic collapse. Thus the agreement is evaluated as the "last exit before the toll".

The agreement is not seen as a cave in, but rather as a victory. While a few conservative elements within the Iranian press have been criticizing Rouhani's foreign policy, those that have been supporting it arein a clear majority.

Everyone knows the agreement

Bazar-e Bozorg is one of Tehran's most important shopping centers. This is ahistoric bazaar that houses hans, or depots, and where one can buy or sell gold in a free market environment and vendors display their books on stands. While everyone seems informed about the nuclear deal, few were willing to comment on it. "We Iranians like everyone else want peace. We are very happy about the agreement" said two old women who agreed to be interviewed only if their names were not mentioned. Meanwhile 20 year old Azeri youth said, "The agreement is promising, but let's talk again once the money begins to flow."