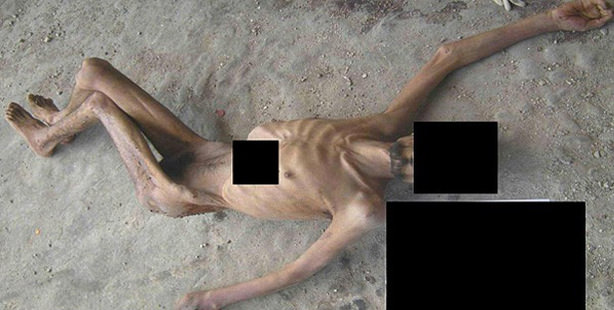 A person who served for Syrian army for 13 years as a military policeman together with his colleagues took for two years 55,000 photographs of 11,000 people who were systematically tortured to death by Assad regime.

A former member of the military service for the Syrian government for thirteen years was set to photograph and document the dead bodies of military soldiers brought from their places of detention to a military hospital during the civil war in the country.

The bodies brought to the hospital, fully consisted of detained-Syrian opposition members, which showed signs of starvation, brutal beatings, strangulation and other forms of torture and killing. It became routine for the military service to take photographs of the bodies and faces of people in detention after designating those with a 'numbering system', who had been brought to the hospital after being tortured and killed.

These images of bodies and faces of the dead with handwritten codes on each, have been accepted as 'documents' of a systematic torture and killing of people under the 'execution-orders' within the Syrian army. The military police, having photographed 55,000 photos within two years, who was fed up with the killing policies by torture, has built confidential contact with Syrian oppositions.

The military police regularly recorded and sent the copies of these photographs secretly to a trusted contact using a 'flash drive' (memory stick).

With attempts of the Syrian opposition, an inquiry team of international lawyers has been set up of experts of forensic medicine and forensic imaging in vast experience in the prosecution of war crimes, crimes against humanity and other crimes contrary to international law.

The team included the former lead prosecutor of ex-President Milosevic of Yugoslavia before the International Criminal Tribunal for the former Yugoslavia and prosecutors and lawyers of the special Court for Sierra Leone.

Upon the material, it was revealed there was clear evidence of systematic torture and killing of the people in photographs, who were tortured while their limbs were tied and strangled with ligatures and cable ties.

Another attracting point of the inquiry is that emaciation was used as a torture method.

The team estimated that there were some fifty-five thousand (55,000) photographic images of some eleven thousand (11,000) detained persons who had been tortured and killed by agents of the current Syrian regime since the beginning of the uprising against the Assad regime in March 2011.

The members of the team also heard evidence from the contact of the military soldier. The team concluded that all material were acceptable 'clear evidence', capable of being believed by a tribunal of fact in a court of law.

While listening to a Syrian military policeman who carried out one of the most intriguing works in the world, renown war crimes prosecutors and forensics experts have decided to codename him "Caesar" for his safety.

Together with his colleagues, "Caesar" documented with 55,000 photographs the crimes against humanity committed by the regime during the civil war in the country. Being a witness who will be mentioned most often in the future, "Caesar" explained to Inquiry Team all the details he saw. In the report, the inquiry team did not mention any information excluding the codename and profession of the military policeman.

"Caesar" had worked at military police unit in the Syrian army for 13 years. Originally his job had involved the taking of photographs related to ordinary criminal matters and sending them to "the judiciary". In short, he was a scenes of crime investigator.

"Caesar" told the team that since the civil war against the current regime began, his job changed from taking photographs of crime scenes and accidents to "taking pictures of killed detainees". "Caesar" together with his others in his section photographed and documented bodies of detainees who had been killed for two years.

-How does the systematic killing work?

According to the report, the procedure was that when detainees were killed at their places of detention their bodies would be taken to a military hospital to which he would be sent with a doctor and a member of the judiciary, "Caesar's" function being to photograph the corpses.

Each murdered detainee was given two numbers with only the intelligence service knowing the identities of the corpses.

The report says the procedure for documentation was that when a detainee was killed each body was given a reference number which related to that branch of the security service responsible for his detention and death.

When the corpse was taken to the military hospital it was given a further number so as to document, falsely, that death had occurred in the hospital.

The purpose of documenting the corpses was to ensure that none had been released by the security services and to inform the families of murdered detainees in due course that the cause of death in each case was either a "heart attack" or "breathing problems" and to satisfy the authorities that executions had been performed.

"Caeser" informed the inquiry team that there could be as many as 50 bodies a day to photograph which required fifteen to thirty minutes of work per corpse.

Once the bodies were photographed by "Caesar" they were taken for burial in a rural area.

"Caesar" told the inquiry team that he did all this "for the sake of Syria and the Syrian people so that the killers could be prosecuted to achieve justice".

This witness informed the inquiry team that "Caesar" was working with his group from an early stage, the witness having contacted "Caesar" for this purpose in or around September 2011.

The witness also confirmed that he was Caesar's relative and that he had left Syria five days after the civil war against the current Syrian regime had begun and established contact with international human rights groups.

A confidential inquiry team has been established by the firm of Carter-Ruck and Co. in the City of London in a result of efforts of Syrian opponent human rights activists.

- Members of the Inquiry Team

The Right Honourable Sir Desmond de Silva QC (Chairman) : A former Chief Prosecutor of the Special Court for Sierra Leone. Appointed personally by the Secretary General of the United Nations. In that capacity he brought about the arrest of President Charles Taylor of Liberia.

Professor Sir Geoffrey Nice QC : The former lead prosecutor of ex-President Milosevic of Yugoslavia before the International Criminal Tribunal for the former Yugoslavia.

Professor David M. Crane:  The first Chief Prosecutor of the Special Court for Sierra Leone. Appointed personally by the Secretary General of the United Nations. In that capacity he indicted President Charles Taylor of Liberia.

The members of the inquiry team travelled to a country in the Middle East and started to examine the photographs. Samples from the photos were tested in the London-based Acume Forensics Center.

The center has guaranteed that there was no alteration in the digital forms of the photos and that they were real.

The witness codenamed "Caesar" and his family, whose life safety was under danger, was removed from Syria through confidential ways. The defector, who was codenamed "Caesar" for his own protection, was interviewed by the team on the 12th, 13th, and 18th January 2014 and answered each kind of question. The team has marked down to the report that 'Ceasar' revealed no signs of being 'sensational' nor did he seem partisan and was reliable.

In fact, it was an attracting point that 'Ceasar' made it quite plain that he never witnessed a single execution but only photographed the images of dead people.

The inquiry Team examined the photographs carefully and confirmed the methods of murdering.

The legal team was further informed that there were some fifty-five thousand (55,000) photographic images of some eleven thousand (11,000) detained persons who had been tortured and killed by agents of the current Syrian regime.

The vast majority of the images were of young men most likely between the ages of twenty and forty.

It was confirmed that all of the detainees were killed.

Many several were killed with rope, plastic cable tie, timing belt cover that is used for vehicles. These objects were photographed as they were around detainees'neck. Instead of execution they were choked by hand.

Overall there was evidence that a significant number of the deceased were emaciated and a significant minority had been bound and/or beaten with rod-like objects.

As the report showed, there was a high level of emaciation and images of many of the individuals showed evidence of discoloration and ulceration primarily on the bodies. Indeed the emaciated bodies of those killed may well tell a story of starvation used as a means of torture.

"There appear to have been many forms of torture used by those responsible for those in detention," the report said.

"For example there was evidence of injury by electrocution on some of the bodies." The bodies were photographed as unclothed or minimally clothed.

"The inquiry team is satisfied that upon the material it has reviewed there is clear evidence, capable of being believed by a tribunal of fact in a court of law, of systematic torture and killing of detained persons by the agents of the Syrian government," the report said at the conclusion.

New evidence of war crimes allegedly carried out by the Syrian government was released on Monday, in a report carried out leading by a London-based inquiry team of leading legal and forensics experts for international law firm Carter-Ruck.

The report relied on the evidence of photographs of dead detainees which had been provided by a Syrian defector. They were verified by Stephen Coles, an imaging forensics expert who has worked with the UK's Ministry of Defence and West Yorkshire Police.

The conclusion that the photos could potentially support charges of crimes against humanity and war crimes was made by a legal team of experts who have all led major international human rights cases.

Professor David M. Crane and Sir Desmond de Silva were both former Chief Prosecutors of the Special Court for Sierra Leone and were respectively responsible for the indictment and arrest of former Liberian President Charles Taylor.

Professor Sir Geoffery Nice QC led the prosecution of Slobodan Milošević's trial at The Hague and was responsible for linking Milošević to atrocities committed in former Yugoslavia.

The injuries themselves were inspected by forensics experts Dr Stuart Hamilton and Professor Susan Black - who in 1999 led the examination of bodies found in mass graves in Kosovo to verify reported massacres of Kosovan Albanians by Serbs.