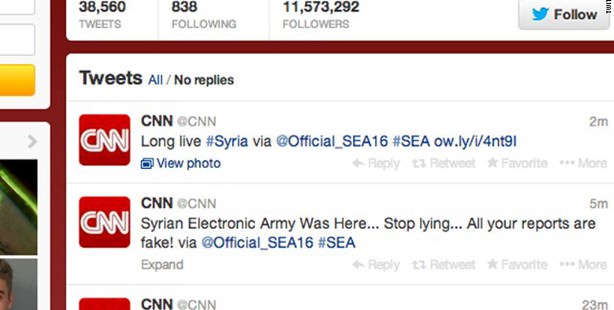 Pro-Assad group Syrian Electronic Army hacked some of social media acoounts belonged to CNN, on Thursday, and send out a series of messages.

The posts were deleted within minutes and the accounts have since been secured.

Some of the posts claimed that the Syrian Electronic Army, a group of pro-Syrian regime hackers that has aggressively targeted major news organizations and activists, was responsible.

"Syrian Electronic Army Was Here...Stop lying... All your reports are fake!" one of the posts on CNN's Twitter account said.

Another post Thursday night on a Twitter account purportedly tied to the group said it was retaliating for "viciously lying reporting aimed at prolonging the suffering in Syria."


The group also claims to have hacked other major American and British news organizations, as well as Columbia University and rights group Human Rights Watch.