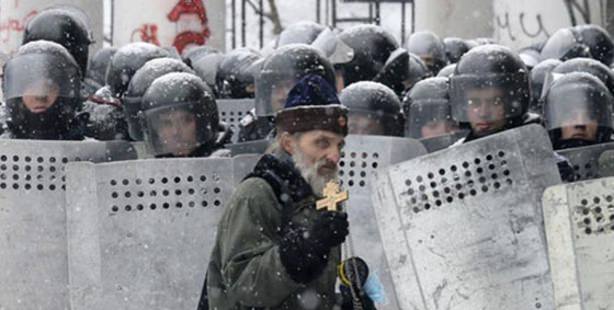 Ukrainian police have confirmed that two young men who died in the latest clashes with security forces were killed by gunshot wounds but denied responsibility for their deaths.

"The cause of death of both men was gunshot wounds," the interior ministry said in a statement.

Police identified the victims as Sergei Nigoyan, a 20-year-old from the industrial region of Dnipropetrovsk, and Mikhail Zhiznevsky, a 25-year-old national of Belarus.

A police statement released Thursday said Nigoyan was killed with buckshot, while Zhiznevsky died from a hunting bullet.

The statement said Ukrainian police did not use the ammunition with which the two young men were killed during the clashes on Grushevsky Street, in the Ukrainian capital Kiev.

"Besides, police and interior troops who are protecting public order there have no service weapons on them," Vitali Sakal, first deputy head of the main investigative directorate of the Ukrainian interior ministry, said in the statement.

Investigators were probing the use of the firearms, he added, suggesting that someone wanted to "provoke an escalation of the conflict and justify the use of weapons by protesters".

He referred to "numerous videos" showing people carrying firearms. Police were seeking to establish all the circumstances behind the shooting deaths, he added.

"It has already been established that the bodies have been moved (and) that there are no witnesses to what has happened," the statement said.

Opposition activists battling security forces say five people have been killed in the most recent clashes, including four who have been shot dead.

This week's clashes come after two months of protests over President Viktor Yanukovych's refusal to sign a deal forging closer ties with the European Union, a move made under pressure from Russia.